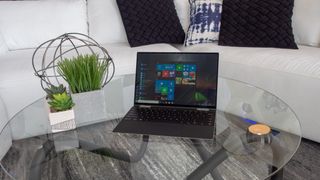 Intel Ice lake 10 nanometer processors have just been launched, and the Dell XPS 13 2-in-1 (2019) is one of the first laptops to benefit from Intel's new tech.

This is exciting news, as the  Dell XPS 13 is – in our opinion – the best laptop in the world right now, so now that the 2-in-1 version has been upgraded with the latest 10nm Intel Ice Lake processors, it means the best laptop has just got better.

What’s perhaps most impressive is that the Dell XPS 13 2-in-1 uses the full U-series of Ice Lake processors. Previous XPS 13 models used the lower-powered Y-series of Intel CPUs. By switching to the U-series, the XPS 13 will no longer have compromised performance – and for the first time will also feature quad-core processors.

The new processors aren’t the only changes made to the Dell XPS 13. It now comes with a new MagLev keyboard, which uses magnets to make the keys feel more satisfying and comfortable to type on, even with the XPS 13’s shallow keyboard.

We’ve asked Dell for a review unit, so we’ll let you know our thoughts on the upgraded XPS 13 2-in-1 as soon as we get our hands on it.