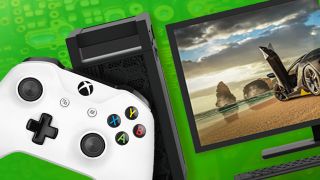 Xbox is phasing out unnecessary dongles for your Windows 10 PC, announcing a new line of computers that communicate wirelessly with your Xbox accessories without the need to buy any extraneous adapters.

From there, the company also plans to bake Xbox Wireless connectivity directly into PC motherboards so that one day, any applicable computer you buy - or build yourself - can talk to your headset, Rock Band guitar, arcade stick, or wireless controller right out of the box.

Microsoft's first foray into Xbox integration will be the Lenovo IdeaCentre Y710 Cube - a VR-ready gaming rig due out in October with a built-in Xbox Wireless Adapter that can support up to eight different controllers at once.

Other partners on board with Xbox's initiative include peripheral bigwigs such as Astro, HyperX, Lenovo, Mad Catz, PDP, Plantronics, Razer, SteelSeries, and Turtle Beach.

While we might stick to the ol' mouse and keyboard when the Battlefield 1 open beta rolls around, there are many times when we prefer to cozy up with a classic controller.

However, using an outside accessory on a PC often means also using up a precious USB slot on either a tangle-prone cable, a Bluetooth receiver, or some kind of proprietary adapter.

With the integration of the Xbox Wireless infrastructure in more devices, connecting an Xbox One controller to your PC will be as simple as connecting to a console - just turn it on, connect to your machine, and start playing.

The divide between Xbox and Windows 10 has been shrinking since this year's E3 - exemplified by Microsoft's newly-announced cross-platform game service, which will allow titles like Gears of War 4 and ReCore to be shared (and played) between the Xbox One and PC simultaneously.