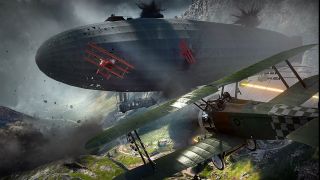 If you came away from EA's E3 press conference this year thinking that you'd heard the word 'Frostbite' quite a lot, it did come up an awful lot.

We got the news that both FIFA 2017 and Mass Effect: Andromeda would be running on DICE's engine, which was originally produced to handle the massive multiplayer action in the Battlefield series.

These announcements are not coincidental. EA's CEO Andrew Wilson has said previously that the company is making a conscious effort to move towards a single engine for all of its games, having recently been using as many as 20 different engines.

In some cases this means that EA will no longer be paying to license the third party Unreal Engine from Epic Games, and in others it means that it's stopped using other internal engines, such as the Ignite engine which previously powered FIFA (and continues to be used for Madden).

For EA the advantages of this move are obvious. Firstly it won't have to pay to use someone else's engine, saving the company money if it's able to do it more efficient internally.

Secondly it can share technology more easily between studios. If DICE works out a really cool way to handle dynamic weather then it should in theory be easier to include this same feature in FIFA if the latter is using the same engine.

Thirdly is control relative to using a third party engine. If EA decides that a certain feature is the future of gaming, then it can reprioritise development on its engine to make sure the feature is implemented.

If it were to use a third party engine, it would have to wait for the market as a whole to demand a feature for it to be implemented.

But what does this mean for games?

But enough about what this means EA, we want to know what impact this is likely to have on the games that we'll end up playing.

First is more destructible environments. The Frostbite engine made its debut with the highly destructible Battlefield series, and this destructibility looks set to continue with Battlefield 1, the trailer for which featured a zeppelin crushing several buildings as it fell from the sky.

It would be crazy to claim that FIFA 17 will see you destroying stadiums with reckless abandon, but we wouldn't be quite as surprised to see it make an appearance in an upcoming Need for Speed or Mass Effect.

Second is dynamic weather. Weather is nothing new for FIFA, where wet conditions will dramatically impact upon the movement of the ball across the pitch, but the movement onto the Frostbite engine will mean that weather can be more dynamic and change throughout the match.

When Need for Speed came out last year it was criticised for featuring too much rainy weather, so we're hoping that as the Frostbite engine develops that we'll see more weather types make an appearance in upcoming Need for Speed games.

Finally, compared to the Unreal Engine which was previously used in the first Mirror's Edge and the Mass Effect series, the Frostbite engine features remarkably improved facial animation.

In comparison, Frostbite has tended to cope much better with faces, which was apparent as early as Battlefield: Bad Company 2, which used version 1.5 of the Frostbite engine.

Using a single graphics engine for all of its games will not be easy considering EA is involved with genres as diverse as sports games, shooters and racers, but what we've seen so far suggests that the initiative is working well.

Having a single team do all of the heavy engine lifting across multiple projects will hopefully also decrease costs for the company, allowing it to spend more time and resources on packing its latest titles full of features.