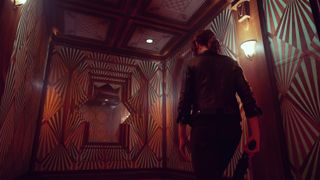 Control, the supernatural thriller by Remedy Entertainment that released earlier this year, has already been making telekinetic waves on PS4, Xbox One, and PC since its launch in mid-2019 – and it looks like the development team are already looking ahead to the possibilities afforded by next-gen consoles.

And while Control itself hasn't been confirmed for either the PS5 or Xbox Scarlett, it's clear that the big players in the gaming market are hard at work prepping for the hardware's increased capabilities – as voiced by key members of Remedy in an interview with Official PlayStation Magazine.

"With the extra burden of a detailed destruction system, it’s safe to say we hit the limit on what could be achieved on older CPUs. When it comes to the PS5, faster hardware is always appreciated and will make life easier in the short term.

"But it’s the new SSD that really stands out; essentially streaming will become something that we don’t really have to worry so much about and it will free up some extra CPU bandwidth in the process."

Lead Graphics Programmer Latu Aalto also noted the next-gen consoles' ray tracing capability, saying that it was a "fundamental shift in how to approach computer graphics".

The PS5 and Xbox Project Scarlett consoles are the source of much speculation these days – as while we have an end-of-2020 release window for both, along with increasing detail concerning the capabilities of the hardware, it's the games that are going to make or break each console, and players are naturally wondering what experiences are going to make it onto the next Xbox and PlayStation.

Control is an AAA game already pushing the limits of current-gen hardware, making the most of recent developments in ray tracing technology – a key feature of both of the PS5 and Xbox Scarlett consoles – with Remedy initially recommending only the most powerful GPU graphics cards to handle the game.

We could well see a re-release for the new consoles then, though Remedy's comments for official PlayStation Magazine could also point to a whole new experience altogether to make use of the improved hardware.

The use of ray tracing certainly would make the game's re-release a good fit on PS5 and Xbox Scarlett, and the small line-up of brand new games in the first few months of the consoles' lifespans will make re-releases or backwards compatibility crucial for giving players enough reason to make the jump to new hardware. But with still a year to go until the PS5 lands, there's plenty of time for new announcements – and for devs to get to work porting their existing titles.

Edit: this article previously stated that Control had been confirmed for next-gen consoles. This has now been amended.