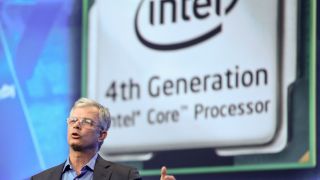 Could a MacBook Pro with Haswell chips arrive at WWDC?

Apple MacBooks and Windows laptops with Intel's new Haswell chips will benefit from a 50 per cent boost in battery life, the company has claimed.

The new generation of processors, which will focus on lowering power consumption without compromising on performance, are set to be officially unveiled at next month's Computex show in Taipei.

According to Rani Borkar, corporate VP and GM of the Intel Architecture Group, the Haswell processors will offer a huge improvement over the current-gen Ivy Bridge chips when it comes to battery longevity.

In a media briefing, reported by ComputerWorld, Borkar said that in standby or idle mode, the chips will be up to 20 times more efficient. Impressive stuff.

The improvements are hugely important to Intel's manufacturing partners and consumers who're searching for that holy grail of all-day battery life from a laptop.

Apple's MacBook range may be among the first products to benefit from Intel's new chips.

Reports earlier this month suggested that new MacBook Pro laptops, featuring Haswell processors would be launched at WWDC on June 10.