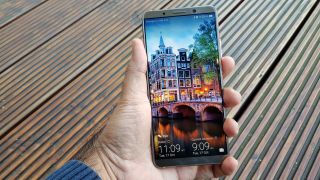 Ever since we traded phones with buttons for tiny touchscreen computers 10 years ago, we've complained about smartphone battery life.

What is it?
We play a 90 minute HD video with a phone at 100% battery, with screen brightness at max and accounts syncing over Wi-Fi in the background.

What are the results?
We measure how much battery is lost during the 90 minutes, and give the result as a percentage.

We've gained great cameras, Instagram and mobile games that look better than some console titles - but we've also inherited the need to charge our phones every day. And we're still not happy about it.

TechRadar reviews just about every major phone that makes it to shelves in the US, UK and Australia, though. We know about the phones that will keep partying 'til 3am, and those that might pass out before you finish work if you dare to listen to a podcast or do some gaming on your lunch break.

You might wonder how some of these phones are doing well with smaller batteries - that's because it's not about the size of the power pack, but how well optimised it is. Here are the top phones of the moment we've tested for battery life with media playback.

A lot of the attention in the last year has gone to the iPhone X and top Samsung phones. However, if you ask us the Huawei Mate 10 Pro deserves some of the spotlight.

As well as being a fantastic phone all-round, it has the best battery result we've seen from any flagship of the last year. It lost just 9% of its battery from a 90-minute video played at full screen brightness.

It's the only top-tier phone from the big names that we've found to realistically last two days. You still won't get that sort of stamina if you're a heavy user, but perhaps Elon Musk can tackle that one once he's reinvented public transport.

The phone has a 4000mAh battery, so it's no surprise the Mate 10 Pro lasts as long as it does.

Any reasons to be put off? It's one of the new breed of phones to leave out a headphone jack, which we still struggle to accept. And while we're now quite at home with Huawei's Emotion UI interface, those new to it may find its quirks difficult.

The BlackBerry Motion is a fairly conventional Android phone with a chunky 4000mAh battery that loses just 10% of its charge after a playing 90 minute video. This is the kind of phone you can hammer and still be sure it'll have some charge left at bed time.

Going from a phone with average battery life to this is a revelation.

Other neat elements of the Motion include a customization function button on the side and a design inspired by classic BlackBerry phones. However, we aren't in love with absolutely every element of the phone, with uninspiring core hardware (aside from the battery) and a so-so camera the main complaints.

However, if a phone on which you can rely is the main concern, jump right in.

The phone that costs this much had better be special in every respect. And, thankfully, it is.

Its battery is far better than the iPhone 8 Plus's, and almost every Android, according to our battery test. It lost just 10% charge after playing a 90 minute video with the screen brightness maxed.

And that's with just 2716mAh to its name, capacity lower than that of all flagship Androids. Part of this comes down to Apple's famous software efficiency. However, Samsung also deserves some of the credit here too.

It makes the Super AMOLED display panel of the iPhone X, and it's very easy on the juice. Of course, if you must make animoji videos all day long, your iPhone isn't going to last forever between charges.

You might expect the top-end Galaxy Note 8 to last longer than the Samsung Galaxy S8 Plus. But it doesn't.

This slightly more conventional phone actually has a larger battery, though. It's a 3500mAh unit, slightly smaller than that of our old favorite the Galaxy S7 Edge, but is a full 200mAh larger than the Note 8's.

You can expect it to last a solid day-and-a-half without thinking too much about when your phone will switch off.

The best popular budget phone with great battery life is the Moto G5 Plus. It even beats the more expensive Moto G5S Plus version according to our testing.

90 minutes of video at full brightness takes 12% off the 3000mAh battery's charge level, showing you don't need to spend big money to get a phone that will (almost) definitely last through the night. If anything it proves there's sometimes little link between how much you pay and how long your phone lasts.

This is also a good phone for budget gaming. It has a large 5.5-inch screen and a respectable, if ageing, Snapdragon 625 processor. The Moto G5 Plus was also among the first Moto phones to use metal in its design, meaning it's got a decent build quality too.

Parts of it are still plastic, but a little touch of aluminium on your fingers makes it feel as though you’re using a high-quality phone.

If you're on a budget and want a long-lasting phone you can buy without importing, this in the one to look out for.

This is still a phone you can rely on to last a full day and change rather than two. But it's a top choice for those that want higher-end specs.

Every year OnePlus gives us a phone that offers killer value. For a while, with the OnePlus 5, it looked like that strategy was on the wane. We got some upgrades, but a higher price than usual.

However, that's flipped back now that other top-end phones are more expensive than ever. We may not have the prices of the original OnePlus One, but the OnePlus 5T offers real high-end specs at half the price of some of the other big names.

A 90-minute video takes 12% off the 3300mAh battery, making this a phone you can milk pretty aggressively without it dying before bedtime. OnePlus also offers one of the best fast-charging options going through its Dash Charge system.

It's a little different from the Qualcomm Quick Charge variants used by most other high-end Androids. Where they use higher voltage, Dash Charge uses a higher amp rating, avoiding overheating while delivering very fast charging.

BlackBerry's not dead? That's right, BlackBerry has actually released some pretty nifty mobiles in the past 12 months, including the long-lasting KeyOne.

This looks very much like an old BlackBerry reborn for today, with a physical keyboard below a squat screen. Its 3505mAh battery lasted a solid 36 hours of real-world use for us, and it did extremely well in our battery test. 90 minutes of video playback reduces the level by just 11%, on-par with the longest-lasting Androids.

Of course, the KeyOne does have the benefit of a smaller display than other phones of its size, so fewer pixels to power. Call it cheating if you like, but it works.

The BlackBerry KeyOne costs quite a lot given it uses a mid-range (and ageing) Snapdragon 625 CPU, but at least it offers something out of the norm. Those not bothered about the keyboard should also consider the BlackBerry Motion, a conventional-design Android that does even better.

The LG V30 can be thought of as a half-year update to the LG G6. It has a newer processor and a slightly larger screen, but because this is a V-series phone rather than a G-series one, LG didn’t need to try to blow the doors off the phone's design with this model.

That said, it is pretty costly for an LG phone these days, so you'll need to want to all the power hidden inside if you choose this model.

Its fairly conventional sounding 3,300mAh battery does very well in our video run-down battery test. This is something we do with all our review phones, making them play a 90-minute video at maximum screen brightness to see how much the battery level drops.

The LG V30 loses 13%, where some phones with mediocre stamina might lose more than 25%, making this a solid all-day mobile.