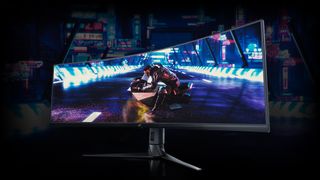 You may recall that a while back AMD had a ‘Windmill’ demo to illustrate how the original FreeSync worked to mitigate stuttering and tearing, and now there’s a second demo about to be unleashed to show off the benefits of the firm’s improved FreeSync 2 HDR technology.

The new ‘Oasis’ demo (note that it isn’t a benchmarking utility) runs through various intricate landscape scenes to make the benefits of FreeSync 2 HDR clear. It has been built using Unreal Engine 4 and supports HDR10.

Viewers can switch FreeSync on or off, and also switch between HDR and SDR, to see for themselves exactly what difference this makes. It will also be possible to control the speed of panning, rewind the demo, or change various graphics settings (effects, shadows, bloom and so forth). Also, make sure you check out our pick of the best FreeSync monitors for G-Sync.

So what does FreeSync 2 HDR actually entail and how does it move AMD’s syncing tech forward? You wouldn’t be the only person to wonder, which is exactly why AMD is releasing this demo, and is planning to showcase it in retail stores.

In a blog post, AMD noted: “In addition, we’re planning a program where people browsing monitors in retail stores will have better visibility on FreeSync and FreeSync 2 HDR products – stay tuned for more on that.

“We hope that once you experience the demo live at a store, you’ll be convinced to get on the AMD Radeon FreeSync 2 HDR Technology train and never look back.”

It very much sounds like this is a big push from AMD to show exactly how FreeSync 2 HDR, in the company’s own words, “raises the bar to the next level for gaming displays”.

So, to go back to the question, what does FreeSync 2 HDR actually bring to the table above and beyond AMD’s original FreeSync tech?

Well, obviously enough, there’s support for HDR monitors, and what’s more, FreeSync 2 HDR panels must conform to a certain HDR specification laid down by AMD. Indeed, there is a “meticulous monitor certification process to ensure exceptional visual experiences”, no less.

Another step forward is the fact that AMD is insisting FreeSync 2 HDR monitor makers guarantee support for LFC or Low Frame-rate Compensation. LFC is used when you’re running games and your GPU is struggling and can’t meet the minimum supported FreeSync range in terms of the monitor’s refresh rate.

LFC artificially bumps up the frame-rate your PC is achieving – by showing the same frames twice, or more – to boost it so it’s within the supported range, so the syncing tech will kick in to do its expected anti-stuttering trickery. Without LFC, if you’re running below the supported range, you’ll still get tearing artefacts and jerkiness, as syncing won’t be active.

Finally, FreeSync 2 HDR also brings a low latency guarantee, simply meaning that the monitor in question will have a low input latency (and that includes when running HDR).

Note that the core syncing tech remains the same as the original FreeSync, but what you’re getting is all these extras.

AMD says that there are now 11 monitors available which support FreeSync 2, including the Samsung 49HG90, Asus ROG Strix XG49VQ (pictured at the top of this article), and AOC Agon AG322QC4.

The Oasis demo isn’t available to download at the time of writing, and it’s not clear if AMD will release it publicly – it may well simply be intended to be distributed to the likes of the aforementioned retailers to show off the relevant monitors.

That said, if the company does make the demo available so you can try it out on your FreeSync 2 monitor at home, we’ll be sure to let you know. Meantime, you can check out the above video for a glimpse of the demo, and AMD has some further website blurb here.