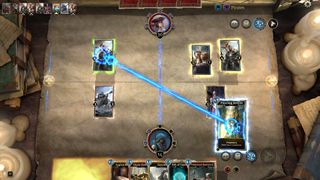 This week hasn’t been kind to the genre. Earlier in the week, CD Projekt announced that as of December 9, it will “discontinue support of console versions of the game.”

Is The Elder Scrolls: Legends officially dead? Well, no. Not yet anyway. However, Bethesda just recently announced that it will no longer be working on any new content for the competitive strategy card game.

“We decided to put any new content development or releases on hold for the foreseeable future,” said Christian Van Hoose, TESL’s community manager, on the game’s subreddit.

While this decision, according to PCGamer, doesn’t affect the Asia-specific version of the game, it does mean that the rest of the TESL community won’t be getting any new expansions, fresh content and future updates. That includes the upcoming full card pack expansion that was slated to come out before the end of the year. So, it could be the beginning of the end.

That isn’t surprising. Though the game has been well-received, it has also struggled to reach the same level of mainstream success as Hearthstone and even Magic: The Gathering Arena. It’s also suffered a few setbacks, including the long-overdue release of its console ports, originally slated to arrive in 2018, and the criticisms its last expansion, Jaws of Oblivion, received.

TESL isn’t shutting down for good

While the news will prove disappointing to fans of the game, devoted and prospective TESL players alike need not worry about the game and its existing expansions.

Van Hoose says that the game is still available for download and play on all existing platforms, and players can still compete online. In addition, Bethesda will continue to “support the game with monthly reward cards and regular in-game events” as well as “provide ongoing maintenance support.”

Though for how long, we don’t have no idea.