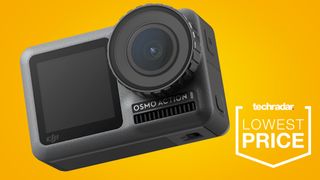 Black Friday has produced its best action camera deal so far, with huge discounts on the DJI Osmo Action, a new contender that offers GoPro-rivaling performance for a now-bargain price tag.

The Osmo Action is an impressive debut action camera from DJI, which is best known for its drones. It combines the ability to record 4K video at 60fps with excellent stabilization to help you shoot smooth clips even in challenging situations like mountain biking or watersports.

Like its GoPro rivals, it offers waterproofing (down to 11m) without the need for a case and a larger touchscreen than the one you'll find on the new Hero 8 Black. It also trumps its main competitor in other areas, including its front screen (which is handy for recording shots to camera) and intuitive, responsive menu system.

The Osmo Action is now available in the US with a $70 discount at Walmart, bringing its price down to only $279. That's over $100 cheaper than the GoPro Hero 8 Black right now. In the UK, its price has been slashed by an even bigger 30%, taking it down to £229.

DJI Osmo Action: $279 at Walmart
DJI's action camera matches its GoPro Hero rivals for features and performance, but with this discount it's even better value. It shoots 4K at 60fps, has excellent image stabilization and includes a handy front screen that's great for vlogging or travel videos.View Deal

DJI Osmo Action: £229 at Amazon
The Osmo Action is getting a seriously tempting discount in the UK, with Amazon now offering 30% off its usual price. This is a fantastic deal on an action camera that more than matches GoPro's flagships, with 4K shooting at 60fps, a useful front display and impressive video stabilisation.View Deal

GoPro's main advantage over its new competitor is its range of accessories and mounts, although the DJI Osmo Action does come with some adhesive mounts and a quick-release base.

You can also buy a range of other accessories for it, including everything from a floating handle for watersports to a more pro-friendly ND filter kit, which helps boost your shooting options in bright conditions.

Considering its performance and range of features, the Osmo Action is a fantastic buy at its new Black Friday price, and a great GoPro alternative for those who can't stretch to the pricier Hero 8 Black.