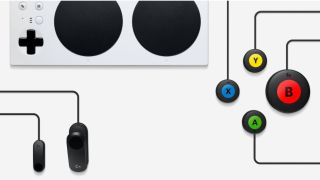 Logitech has just released a new tool for gamers to offer improved accessibility customization at a more affordable price. The new Logitech G Adaptive Gaming Kit works together with Microsoft's Xbox Adaptive Controller, adding a range of buttons and triggers for $99.

This kit was designed by Logitech with input from the Microsoft Inclusive Tech Lab and a number of accessibility groups, including The AbleGamers Charity and the Abilities research Canter at Mount Sinai.

AbleGamers COO Steve Spohn said of the kit, "Everyone's needs are different, and the Logitech G Adaptive Gaming Kit delivers a wide range of configuration options to make gaming a possibility for all. We appreciated the opportunity to work closely with Logitech G on the design of this kit and look forward to continuing our partnership in the future.”

The buttons and triggers all have space on them for Logitech's included stickers, for easy labeling of the custom button layouts. Each button and trigger also has a long cable for connecting to the slots of the Xbox Adaptive Controller.

The kit also includes surfaces for attaching the buttons and triggers, to create a custom layout that won't slide around or get jumbled. There are flexible and rigid mats to set up the buttons, and velcro ties to hold things in place.

The Adaptive Controller itself offers much larger controls and can be connected to larger joysticks so users can customize the experience to what works for them. Logitech's new kit offers even more of that flexibility, so each gamer can find a unique setup that works best for them, which means more people are able to get into gaming, which we can only see as a good thing.