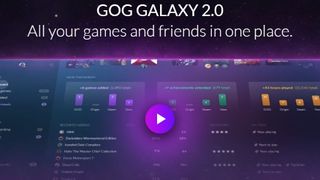 The GOG Galaxy 2.0 open beta has finally begun, and gamers of all stripes can sign up for the new service. Its purpose: simplify gamers lives by combining all of their friend lists and game libraries into one space.

There has long been strain between game consoles, PC gaming, and the friend networks and game libraries available on each. And, with more launchers on PC vying for priority, especially as Steam and Epic Games Store duke it out over exclusives, keeping track of online friends and game libraries can get tricky.

That's where GOG Galaxy 2.0 offers a solution. Before this 2.0 version, GOG Galaxy was just another game store and launcher to add to the list, but GOG Galaxy 2.0 is trying to change all that.

Currently the platform offers 20 integrations with different platforms, from consoles to other PC launchers. This enables gamers to log into different gaming services, and then see their game libraries and online friends from other launchers all within GOG Galaxy 2.0.

For example, if you're looking for friends to play a game online, GOG Galaxy 2.0 can let you know who's signed on and on which platform. Though it's not live yet, cross-platform chat should eventually let you communicate with this friends from right inside the GOG Galaxy 2.0 application.

Friends - and games - all in one place

It does a similar thing for your game library. Much like some smart TVs that bundle media from all your subscription services, you won't have to remember which games you have installed and through which launcher you got them. You can compile your whole library (including games you don't have installed) in GOG Galaxy 2.0. GOG is firm on that point, saying you can "install and launch any PC game you own, no matter the platform." It will even keep track of in-game achievements and progress, and let you compare with friends.

You can check out the GOG Galaxy 2.0 Open Beta here. It is available for computers running Windows 8 or newer and Mac OS X. You can find a trailer for the platform below: