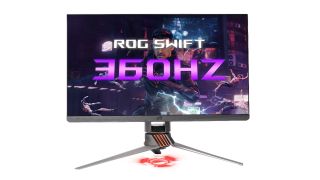 Over at CES 2020, Asus has been busy showing off its ROG Swift 360 monitor, which takes refresh rates to new heights for esports pros, alongside another display that promises to deliver jaw-dropping 4K HDR using mini-LED backlighting.

We’ve already seen the ROG Swift 360 highlighted as part of Nvidia’s revelation of the fastest displays in competitive gaming at CES, employing G-Sync and a rather incredible 360Hz refresh rate.

While monitors hitting 240Hz are nothing new, and we even saw a 300Hz laptop screen at IFA back in September 2019 (also from Asus), 360Hz promises a big step forward.

And when coupled with Nvidia’s G-Sync technology, which aims to tackle stuttering and tearing, you’re looking at a 24.5-inch monitor capable of producing some seriously smooth gameplay – for those with a PC that can drive frame rates well above 300fps, of course.

The display resolution is Full HD, unsurprisingly, as to go higher would obviously be at odds with achieving those sort of frame rates.

The Asus ROG Swift 360 has been made with pro gamers in mind, who will obviously have beefy gaming rigs anyway, and Nvidia enlisted the help of n0thing, a CS:GO pro, to share his thoughts on the new display.

As you can see in the clip below, he observed a noticeable difference between this new 360Hz display and a 240Hz monitor, and a good deal more smoothness is evident when snapping round to take shots at enemies.

This is a PR video, so we have to take it with a suitable pinch of salt, but it all sounds promising and we can’t wait to get hold of one of these screens to give it a test run ourselves.

Asus also informed us when we can expect the ROG Swift 360 to be released, although there were no specifics sadly, with the manufacturer saying only that it will be available “later this year”, and pricing will be announced closer to availability.

That’s more than Nvidia told us, but not much more. When it comes to pricing, however, it’s a fair bet that this 360Hz screen will be something of a wallet-worrier.

Asus further revealed that it has another monitor coming out at some point later this year, namely the ROG Swift PG32UQX.

This is a 32-inch HDR panel with a 4K resolution which uses mini-LED backlighting to achieve 1,400 nits of peak brightness, no less (and has 1,152 zones of local dimming).

The monitor is DisplayHDR 1400 compliant, and should produce some pretty spectacular 4K results.

Indeed, Asus is promising that the PG32UQX will be the ultimate 4K HDR monitor. And the core specs certainly make it seem that way, with a 144Hz refresh rate here, and also support for Nvidia G-Sync Ultimate, for fast and smooth gaming to boot.

As mentioned, this 32-inch effort won’t be out until later this year, and will no doubt command a seriously premium price, although as with the 360Hz monitor above, we won’t know anything specific about pricing until much closer to launch.