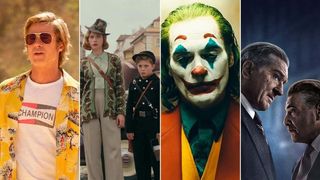 The 2020 Oscar winners will finally be revealed this coming Sunday, and there aren't that many surprises in the nominations, when you really get down to it. Still, despite a disappointing lack of female directors in the Best Director category, the Best Picture nominees are all movies you need to see. You can even watch a number of them at home right now, a couple on streaming services you may already use.

Below, we'll cover every movie nominated in the Best Picture category at the 2020 Oscars and explain how you can watch them now. We'll also highlight a couple of other movies you might want to check out.

We'll point out which movies are only available in theaters (recent movies like 1917 and Little Women won't come to home video for a while), and tell you their likely release dates to buy or rent digitally in both the US and the UK.

The 2020 Oscars take place this coming Sunday on February 9.

Controversial in a slightly artificial way, Joker is available to rent now in the US if you missed it in theaters. After wins at the SAG Awards, Golden Globes and BAFTAs, it's basically a dead cert to win Best Actor Oscar for Phoenix's performance and maybe even the Best Original Score award too, so if you haven't seen this billion-dollar DC Comics adaptation, now you've got your chance. It won't be available on a streaming service in the US until HBO Max launches.

Parasite is now available to buy digitally in the US on Amazon Prime Video if you don't mind spending 15 bucks, while UK viewers are just getting this acclaimed South Korean thriller from director Bong Joon-ho, which incisively examines themes of class.

How to watch it: Netflix (globally)

The first of a couple of Best Picture nominees on this list made and distributed by Netflix, The Irishman is exclusively available on this streaming service no matter where you are. Buckle in for a long watch: it's three hours and thirty minutes long. It's more like watching a miniseries than a film, which means it's actually a pretty good fit for a streaming service.

How to watch it: Netflix (globally)

Marriage Story features career-best performances from Adam Driver and Scarlett Johansson, and you don't have to leave your house to watch it. Netflix financed the Noah Baumbach-directed movie about a complicated divorce, so you can stream it right now. Laura Dern is likely to win the Best Supporting Actress award for her role as a sharp divorce lawyer.

This Le Mans '66 biopic and total dad movie was a surprise best picture nomination, but it's not undeserved. Annoyingly, it's been around in the cinemas a little too long for you to guarantee catching a screening where you are, but Amazon US customers can buy and stream it now.

How to watch it: Amazon Prime Video to buy (US: Our now), in theaters (UK)

Taika Waititi's latest has been rolling out gradually around the world. In the US, you can own it digitally right now, but other territories will have to wait – it only hit UK theaters in January. This one is a very likely candidate for a future Disney Plus release, too, probably towards the Spring months.

Once Upon a Time in Hollywood

Released last August, which is firmly outside of awards season, you can now rent or buy Tarantino's latest on all major digital video stores where you are. Expect to wait a little while to see Once Upon a Time in Hollywood on streaming services, though.

How to watch it: In cinemas (globally)

1917 was recently released in theaters worldwide, and it doesn't have a home video release date yet. It's worth the price of a ticket, though, as Sam Mendes' Great War-set movie has been filmed to look like two continuous shots at no doubt enormous effort and expense. It's a strong contender to actually take the Best Picture award.

How to watch it: In theaters (globally)

Little Women is now in theaters everywhere, but it won't be available digitally for a few months. You're better off checking out Greta Gerwig's adaptation of Louisa May Alcott's novel in the cinema, if you want to catch it. If you're a fan of the '90s version starring Winona Ryder, this actually makes for a perfect companion piece, since it differs on some key talking points from that adaptation.

How to watch it: In theaters (globally), Amazon Prime Video to buy (from February 7, US)

Knives Out deserved to get a Best Picture nomination, but it missed out, settling instead for a Best Adapted Screenplay nod. Still, you should absolutely watch Rian Johnson's murder mystery, which is modeled after classic Agatha Christie whodunnits. It's finally released on Amazon Prime Video as of February 7, which gives you a little bit of time to watch it before the Oscars.

The Avengers missed out on major awards at the Oscars this year, which wasn't entirely unexpected, but it nonetheless picked up a deserved nomination for Best Visual Effects. Disney Plus is the easiest way to watch it in the US, while UK readers will have to watch it on Sky or Now TV if they don't want to buy it on Blu-ray.