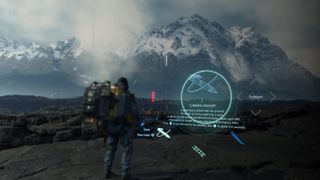 Death Stranding is a game about ropes and bridges, so it’s only natural that you’ve got access to a whole range of mountaineering equipment.

You can craft this equipment at terminals interspersed throughout the map, and most items can be crafted without expending ridiculous amounts of materials.

Here’s a breakdown of when to use each type of equipment in Death Stranding, and whether or not it’s even worth using it in the first place.

Very self-explanatory. Ladders can be placed against steep gradients in order to scale them or make your way down to a lower platform.

It’s almost always worth having at least one ladder in your inventory, and almost never worth having more than two, because they weigh 5kg and you’ve got to be very clever with your cargo management.

Once a climbing anchor has been placed, it can be used to either ascend or abseil down a cliff-face. Naturally, planting a stake in the ground beneath a precipice doesn’t quite allow you to scale it, as there isn’t really any support there, is there.

Similarly to ladders, it’s worth keeping one on you at all times if you can afford the extra weight. You’ll rarely need more than that, especially if you’ve also got a couple ladders, which are more versatile (at least in the moment).

This item repairs containers, but not the precious cargo inside. If you’re liberal with it, you can race through areas plagued by cargo-damaging Timefall without getting so much as a scratch on your container, but remember that once the cargo inside is in tip-top shape, you’ll be well on the way to an S rank.

S rank is something we personally didn’t get much use out of, but if you’re a reckless driver or someone who makes their way through BT areas at a snail’s pace, carrying some CRS might be worth your while.

Bags filled with Sam’s blood that can a) restore health, and b) be infused with bullets. There are 500ml of blood in each bag and up to four can be placed in a special part of your backpack called the utility pouch, meaning that you should always have at least four with you at any given time.

Fake cargo that can be used to distract package-obsessed MULEs. Again, something we never got much use out of, even on the hardest difficulties, but it could serve as a welcome addition to the backpacks of players who prioritize bait-and-switch stealth maneuvers.

PCCs are versatile pieces of equipment that can be used to build a range of structures: post boxes for remote terminal access and depositing retrieved lost cargo; safe houses as private rooms to regenerate health, stamina, and resources, as well as providing access to garages kitted out with vehicles; bridges to, well, build bridges over rivers and abysses; Timefall shelters to protect you from cargo-damaging rain until it subsides; ziplines to connect to faraway areas — these are especially useful if they are on radically different vertical levels; and generators that can be used to recharge batteries, both on exosuits and vehicles — these last structures can seriously get you out of a pinch.

So, what have we learned?

That’s a general breakdown of the various types of equipment in Death Stranding. Try your best to keep a couple ladders and a climbing anchor on you at all times. A PCC never hurts either, just in case things get rough — although remember that these structures can only be built in areas already connected to the chiral network. And always, always, always remember those blood bags.