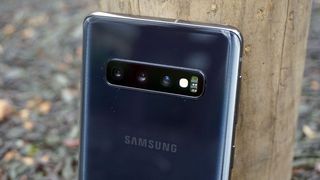 Most top-end smartphones released nowadays record video up to 4K, and other devices cap out at 1080p, but it seems like the upcoming Samsung Galaxy S11 could blow both those out of the water with a whopping 8K video recording.

That's according to an insider, who spoke with SamMobile and told the website that the device will support 8K video recording. There's no word on who the insider is, of course, or how they know about the camera specs, but if this rumor is true it would make the Galaxy S11 a beast for recording video.

However, it's not clear how useful 8K recording will be, since very few people have a way to watch content that high-res. A select number of smartphones, like the Sony Xperia 1, have 4K screens, but none so far have 8K, and according to rumors the Galaxy S11 isn't set to change that.

In addition, very few 8K TVs are available right now, and they're a far cry from 'affordable', with price tags that easily reach five figures most of the time.

So if this Galaxy S11 spec is accurate, you'll be able to record super-high-res content, but perhaps not play it back. In the next few years 8K TVs could become more affordable though, so it's possible Samsung is trying to prepare for the future, especially given it's one of the companies making current 8K TVs. But it's also possible this 8K stat is just made up.

Could this rumor be too optimistic?

While 8K video recording would be a great novelty for a phone, there are a few reasons we're skeptical about the rumor.

Firstly, some rumors point to the Samsung Galaxy S11 camera being 108MP, although we're still not totally sold on that point given it's a huge jump from the 12MP of the Galaxy S10.

One of the key selling points of Samsung's current 108MP camera sensor is its ability to record 6K video (although no-one's used this functionality of the sensor yet), however in its announcement Samsung touted this as the upper resolution limit for video. So either this is a completely different 108MP sensor from Samsung (which it might be), or the rumor is incorrect.

We're expecting the Samsung Galaxy S11's chipset to be the newly-announced Snapdragon 865, which does support up to 8K video recording, but that's no guarantee the device will use it. The Snapdragon 855 supported pictures of up to 192MP, but no phones actually took pictures of this resolution.

We'll know for sure come February 2020, when we're expecting the new Samsung smartphone to be announced, so stay tuned to TechRadar for all the latest news and rumors.