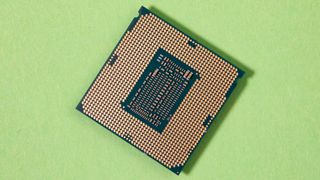 It's been a minute since we've seen new desktop processors from Intel, with Team Blue basically going all of 2019 without releasing a single mainstream desktop chip, with the exception of the Intel Core i9-9900KS. But that era of silence might be ending.

A leaked UserBenchmark entry for an Intel Core i3-10300 has just appeared, giving us an idea of what to expect from Intel's next generation of desktop Core processors, and it shows us that Intel might be feeling that heat from AMD.

The leak, spotted by famed silicon leaker TUM_APISEK on Twitter, points to the Core i3-10300 as being a 4-core, 8-thread part with a boost clock of 4.2GHz. If this leak is accurate, and again this is a leak, it would be the first desktop-class Core i3 processor with hyperthreading in a long time. The current-generation Intel Core i3-9300, for example, is a 4-core, 4-thread part with a 4.3GHz boost.

These specs might not be extremely detailed, but it's enough to be exciting nonetheless. AMD Ryzen processors have essentially made their name on making hyperthreaded processors accessible for everyone, so we're definitely excited for Intel to jump on this bandwagon.

What we don't know is whether or not this is going to be a part of the rumored Intel Comet Lake-S lineup, or if Intel is skipping that to bring 10nm silicon to the mainstream desktop market. The inclusion of hyperthreading in an entry-level model seems to suggest that something new may be afoot. We guess we'll just have to wait to see what Intel has to show at CES 2020 and beyond, but the CPU market may continue to heat up next year, and we're so here for it.