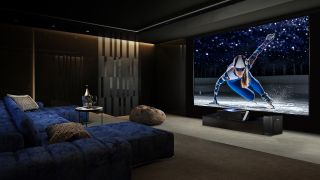 Hisense usually manages to put on a show at tech expos, and it’s certainly done just that at CES 2020. The Chinese manufacturer has pulled back the veil on a host of new television sets for the coming year, including a refresh of its projector/television hybrid laser TV, more premium ULED TVs, with advanced quantum technology dripping down to more mid-range sets.

The L5 Laser TV is the follow-up to 2018’s L10E, retaining the same innovative form factor that teams a display screen with an ultra-short throw projector for precise image control.

Coming in April, the L5 is slightly dimmer than the previous model, at 2,600 lumens rather than the L10E’s 3,000 lumens, and uses a simpler Android TV smart platform rather than Hisense’s Vidaa U interface, as well as a smaller color gamut, but the reduced cost should compensate for the slight drop in performance.

We’ll also see another ULED set, the XD9G ULED, making use of Hisense’s Dual Cell panel, which fuses a 2K and 4K panel together for enhanced contrast, and boasts ‘rival contrast’ to OLED at a lower price. We’ll have to see if the XD9G ULED (the ‘XD’ stands for ‘extreme detail’) can meet those standards when it releases in late 2020.

Hisense’s H Series of ULEDs will get some new models, with a H9G Quantum follow-up to the H9F, and an H8G successor to the H8F, with similar ‘quantum’ contrast tech; these are due in April and March respectively.

Later in the year we'll see the H65G (4K) and H55G (2K) LCD sets: less advanced models with Android smart platforms and without ULED enhancements. The ‘65’ and ‘55’ confusingly don’t refer to screens sizes, though.

As flashy as some of these products may seem, with their XD and laser technology, it’s the more mundane developments regarding smart platforms that hold the most promise for Hisense.

We’ve seen the first Hisense ULED Roku TV, the R8F, and the manufacturer continues to have a huge presence at Walmart in the US with its first line of Hisense Roku TVs. The UK got its first Hisense Roku sets in time for Black Friday last year, too, and it seems like an increasingly fruitful collaboration.

With the somewhat unloved Android TV platform still featuring on many mid-range Hisense sets (with the Vidaa U platform taking over for more premium sets) the interface may be as crucial a factor if you're deciding which Hisense TV to buy as other concerns like HDR.