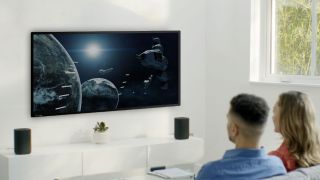 The Roku TV smart platform is used in one of every three televisions sold in the US – and it’s finally bringing its design smarts to the UK – in a partnership with Hisense that will the Roku TV interface to a number of TV models in the Hisense 2019 TV range.

The Hisense Roku TVs are said to be 4K HDR models, with sizes going up to 65 inch TVs – and will be coming fall 2019, meaning we'll see them hit shelves in the coming month or so. But exact pricing, models, and sizes are yet to be confirmed.

Announced at IFA 2019, this marks the first time Roku has given a keynote – or held its own booth – at the Berlin expo, showing a renewed push in its UK and Europe operations.

The Roku OS was created back in 2014 to provide a third-party smart TV platform for television makers in the US. Now partnering with 11 TV brands, and over 150 Roku TV models having hit the market, the move into other territories is unsurprising, though we’ve been asking ourselves (and Roku) when this would happen for years.

We’re told that Hisense will be releasing “multiple models and sizes” of its Roku TVs for the UK in the coming months – likely before the end of 2019 – though they won’t make up the entirety of Hisense’s 4K TVs for the time being. “There will be choice,” a spokesperson adds.

While this is technically the same platform that powers Roku TVs in the US, we’re told that Roku has “redesigned from the ground up an OS that controls the entire television”, meaning we could be getting even more functionality and features than before.

The move towards third-party platforms

You might be wondering why Hisense doesn’t simply keep using its own smart TV platforms. The short answer? It will.

Only a small number of sets will start out using the Roku OS in the Hisense range. But a Roku spokesperson tells us that, in the future, hardly any TV makers will be using in-house / proprietary platforms – given the convenience of outsourcing it to an external company, and the popularity of streaming devices that essentially replace the interface on a smart TV anyway.

“There’s only going to be one TV manufacturer that keeps its own OS, and that’s Samsung,” we’re told – given the dominance of Samsung TVs worldwide, and the work it’s put into its own Tizen OS.

A homogenous interface across every smart TV feels a bit dull in theory – though a move towards more third-party platforms could make for a more consistent user experience as a result.

Some of our favorite US TVs of recent years have run on the Roku OS, including the TCL 6-Series Roku TV (4.5 stars), with the TCL 8-Series 8K QLED using the platform as well. Even if we only have confirmation of the Hisense range for now, it likely won’t be long before Roku TV comes to the UK ranges of TCL and others too.