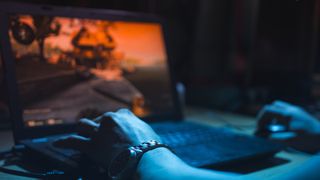 GeForce Now has been around in beta for a long time. In fact, it’s pretty much a grizzled veteran of cloud-based gaming services while Stadia is the fresh-faced (but infinitely wealthy) new kid.

However, recently GeForce Now came out of beta with a very reasonable price tag and the ability to play a big selection of games that you own on Steam, the Epic Store and Origin, among others.

It’s crucial to know that it doesn’t let you play any game however, which is particularly noteworthy in light on how major publishers like Rockstar, Konami, and now Activision Blizzard have pulled their games from the service lately.

But after poking around in GeForce Now to see whether there’s more to the platform than meets the eye, we discovered some interesting things.

Firstly, we found that Steam Family Sharing works without any issues, which is great as that means you can play supported games that belong to your friends (provided they’re not playing a Steam game at the same time).

Also, GeForce Now can technically play unsupported games - and they run perfectly well too - but only on Origin, and with quite a few other caveats.

It’s a noteworthy quirk though, and harks back to the beta days when GeForce Now allowed users to play unsupported games. At the very least, it’s a proof of concept showing GeForce Now to be more robust than it first looks.

How to access Steam Family Sharing in GeForce Now

To set up family sharing on your PC, just log in with the Steam account whose games you want to share, then click Steam at the top left corner > Family and check the ‘Authorize Library Sharing on this computer’ box. Make sure that your account name is also checked in the ‘Eligible Accounts’ column.

A few times we tried running Steam games in GeForce Now, we were taken to the game’s store page instead of it opening. If this happens, just go to your Steam library, find your game and install it (it should be instantaneous as the game files are cached on the GeForce Now server).

With your whole Steam library laid out in front of you, you’re probably tempted to see if downloading a different games works. Don’t bother. Steam will block you from doing so.

How to run Unsupported Origin games on GeForce Now

By default, booting a game from GeForce Now doesn’t give you access to the screen from which you can manage your Steam, Epic or Origin account. When you click a game through GeForce Now, it boots straight to the game (after you log into the account for whichever platform it’s on).

But in Origin, it’s easy to work around this, access your game library, and for now at least play your Origin games. There are a few caveats however:

With those in mind, here’s how to install and play unsupported Origin games on GeForce Now.

Open Apex Legends through GeForce Now, then when you get the option to ‘Activate Game’ just click Cancel. That’s it. You can now browse your Origin library, download games under 35GB and play them.

The interesting thing is that all the games we tested - Dead Space 2, A Way Out, Dragon Age 2 - work perfectly well, showing that a game doesn’t need to be ‘Supported’ to function.

What about Epic Games Store, GOG.com, and others?

You can play Fortnite through GeForce Now, which launches through the Epic Games Store. Again, you can technically access the Epic Games Store library, but don’t get excited about playing all those free games you picked up from Epic over the past year.

As with Steam, Epic blocks you from playing any games other than the one you load in GeForce Now.

At this point, GeForce Now doesn’t support any GOG games, and there’s no way to access your GOG library.

During the beta, GeForce Now actually used to let players run unsupported games on Steam, with Nvidia absolving itself of responsibility should they not work properly (which is fair enough).

This feature was removed from the GeForce Now beta in April 2019, citing reliability and the UI as “two areas that are not always optimal with unsupported games”.

Plenty of players claimed that unsupported games worked well during the beta, and the community didn’t respond too well to the news that the feature was being dropped. No further information was given from Nvidia about whether this feature would return, but there was a glimmer of hope in the original statement when theNvidia rep said that “we’re still working on how we’ll handle unsupported games”.

GeForce Now has had a bit of a rough start, with publishers pulling big - arguably ‘platform-pushing’ - games from the service without warning. These games include Grand Theft Auto V, Metal Gear Solid V, Sekiro and now Activision-Blizzard’s catalog, which includes Call of Duty: Modern Warfare and Overwatch.

Publishers have the power here, and we’re already seeing them wield it in a way that has no regard for GeForce Now users. The return of unsupported games could be the shot in the arm the service needs, but there may be bigger reasons than just technical ones for why it’s not happened yet.

Given Nvidia’s silence on the topic, maybe it’s best not to hold your breath. It still remains a great service, particularly as it lets you play your existing games without pulling you into a whole separate ecosystem like Google Stadia.

If however, you’re set on playing any game you already own via the cloud then you may want to consider Shadow (which recently got a new cheaper price plan) or Paperspace.