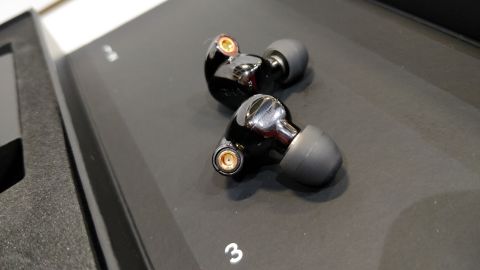 RHA leads the planar charge with these technically groundbreaking earphones. The audio is stunningly tuneful and rich in detail, even if assembly of the earbuds themselves could be more straightforward. If you can afford them, the RHA CL2 Planars are among the best-sounding in-ear headphones out there.

The RHA CL2 Planar earphones are compact wireless earbuds that pack in planar magnetic drivers – the kind of cutting-edge audio technology usually found in open-backed studio headphones that most of us can only dream of affording.

Planar is well-known for offering incredible audio detail and depth, due to its unique and magnet-based driver design. The CL2 Planars, specifically, suspend a 16-micrometer (0.016 mm) diaphragm and planar coil between two magnetic fields. That's right, your drivers are floating in there.

Compressing this technology into in-ear headphones is nothing short of a marvel. It's not the first time it's been attempted – check out our review of the Monoprice Monolith M300 from earlier this year – but it may well be the best example. The wireless connectivity is also a world-first for planar drivers of any size.

While the CL2 Planar earbuds cost hundreds rather than thousands – like some planar cans out there – the high price tag is still a big ask for such small tech. But if you're the 'perfection-seeking' audience RHA is aiming these at, the promise of customization and compact quality may be just what you ordered.

Anyway, after testing them in depth to see if they lived up to the hype, we don't think you'll be disappointed.

While the hardware is plenty to get excited about, the price tag may stop you in your tracks.

The CL2 Planar earbuds come in at a lofty £799 / $899 (about AU$1,250). You get a lot of hardware for that amount of money – more on this below – but there's no option to buy a 'reduced' set with only the cabled or wireless options, meaning you will have to fork out for both.

The earphones released to market in early September, after an August announcement, and are available at a number of select retailers or from the RHA website.

So what do you get out of the box? In keeping with RHA's usual style, there's plenty of scope to customize your eartips, or choose between wired and wireless options.

To start with, there's a foldable hard case for tying up all your cables and wires, with an alternative soft zip pouch, depending on your preference for carrying it around. Alongside casing options are also nine separate pairs of eartips, including double-tipped covers – and some made from a comfy memory foam. There's no definite best choice here, and we recommend trying out a handful to see what works best for you.

You can then choose between wireless and wired play.

The wireless option see the earbuds connected to a band that sits around your neck. The neck band acts as a Bluetooth receiver, with a protruding power button and USB-C charging port. There's a definite weight there, but it's still likely to be more appealing than having a cable trailing all the way down to your pocket.

That said, if you then don't want the fuss of connecting the earbuds to the neck cable and streaming music wirelessly, you can use the 3.5mm braided copper cable to jack straight into your phone, laptop or other device.

There's also a 2.5mm silver-coated cable that will let you link up to compatible amps, and which is claimed to offer a slight enhancement to the audio detail. And you always have the option of swapping out the included MMCX-standard cables with some of your own, if you have them.

Be warned though: the MMCX connectors between the cables and earbuds aren't the easiest to piece together or pull apart, and can feel a bit fiddly – although you may not have much of a need to swap out the cables if you know your preference from the offset.

We were, however, disappointed not to see an in-line remote control on the wired options, as with the Bluetooth band, but it's a small price to pay for a quality tethered connection.

The earbuds themselves are made of a 'near-indestructible' ceramic compound, with plenty of air inside the earbuds to minimize interference with the sound. Considering the slightly bulbous shape of the buds themselves, wearing the CL2 Planars is surprisingly comfortable.

The buds fit naturally into the ear, while the pliable cables are wired behind your ear to keep them in place during listening sessions. You'll have to reshape the cable slightly every time you slip them on, which is a little irritating, but it undeniably does the job.

These aren't casual earphones, so won't be the quickest to slip on and off, but if you're settling in for a long train ride or walk, or getting through an album at home, you're unlikely to find it a hassle. All in all, there's a huge amount of flexibility for creating your perfect setup.

So what of the sound? The planar magnet inside the driver is the main reason behind the high price point, and they're claimed to emit a purer, more lifelike sound than standard audio drivers.

That's certainly our experience of the CL2 Planar.

Its genuinely hard to describe the sound quality, other than calling it tuneful. The resonance of the magnet manages to deliver a sharpness and harmony across a range of frequencies, so individual frequencies never feel like they're competing for prominence, and there's a pleasing depth and detail to the audio.

There's possibly a slight emphasis on lows and highs, rather than mid-frequencies, but the audio always feels even-handed, and delivers a surprising amount of heft on the bass levels. Wearing the CL2 Planars, it's easy to forget that you're not wearing over-ear cans – or, for that matter, why you'd need them in place of the CL2s.

You don't quite get the broad soundstage of, say, the over-ear Oppo PM-3 headphones – also planar magnetic cans – but it's still an incredible audio performance for such compact in-ear technology.

Listening to some tracks, it was clear that the CL2s were even capable of drawing out more audio detail than the Oppo cans, catching the subtle twang of guitars in St Vincent's Los Ageless as it shifted from one earbud to another – a detail we'd never noticed before – or drawing out the reverb in the haunting vocals of Max Richter's Sarajevo.

The CL2 Planar earphones certainly elevate standard MP3, and will be able to cope with the deeper detail and richness of FLAC and Hi-Res Audio, for those with a Tidal Hi-Fi subscription or similar access to high-resolution files.

What might sound like grungy rock on standard high-street earbuds here turns into real, crackling electricity, with startling sharpness – to the point where it can feel slightly overwhelming if you're used to less accurate headphones.

We're not exaggerating when we say the experience is magical, as we'd hope from planar drivers, but wouldn't have expected to such a degree in these compact casings.

Those opting for such audiophile earphones may also be looking to a portable DAC (digital to analogue converter) to enhance their audio further. The sound quality is certainly impressive without one, although when testing the CL2 Planar earphones alongside the iFi xDSD, there was a noticeable lift to the depth and soundstage of Normani's pop track Slow Down, adding a more 3D and stereoscopic feel.

We couldn't detect a meaningful difference using the silver-coated cable, but you certainly have the option if you already have an amp with a (pretty rare) compatible 2.5mm port.

The earbuds also offer surprisingly impressive sound isolation, more than capable of coping with a busy train carriage or crowded street. You're not quite getting the isolation of over-ear cans, but the CL2 Planars get pretty close despite their far smaller size.

When taking phone calls, the in-line mic on the Bluetooth neck band was able to pick up speech easily, though it tended to stop recording entirely when not spoken into – leading to sudden jumps and drops in background noise throughout our conversations.

Other models to consider

It costs serious money to be at the cutting edge of audio technology. As much as we love the sound of the CL2 Planar headphones, there are plenty of high-quality earphones and earbuds available for a fraction of the cost.

If you're looking for planar above all else, the Oppo PM-3 planar magnetic headphones are some of the best closed-back headphones we've ever had the pleasure of trying out, and pack in planar magnetic drivers in a more spacious over-ear package.

There's also the Monoprice Monolith M300 planar in-ears, which come in at a much more respectable $150 (about £110, AU$195), although you'll be trading down to lower-grade materials and far less comfort than you get with the CL2s.

You can check out our list of the best earbuds and earphones in 2018 for some very capable in-ear alternatives to the planar offerings here.

Boy, do the RHA CL2 Planar earphones sound good. A spokesperson for RHA referred to the drivers' "harmonic depth", which is a phrase that rings true for the CL2s. They're impressive earphones with an attractive premium sound and customizable hardware, while the quality of the materials and drivers is far higher than we usually expect from in-ear headphone.

Many of us are happy to shell out three-figure sums for high-quality over-ear headphones, so why not for these? Well, part of the appeal of in-ear headphones is their ease-of-use, and these aren't earphones you'll be wanting to take to the gym, leave on a bus seat on your commute, or chuck too carelessly into the bottom of your bag. Investing this much in such small tech will require a level of care higher than some of us are used to giving to our on-the-go earphones.

Otherwise, the only things really preventing a perfect score for the CL2s are the assembly, and the need to re-twist the wired cable every time you take them on or off. But don't be put off: if you can afford them, these perfectionist earbuds are among the best-sounding in-ear headphones out there.