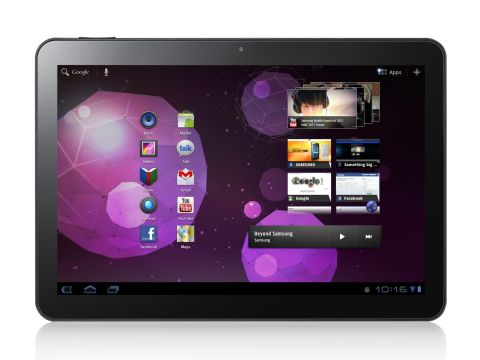 The Samsung Galaxy Tab 10.1V will be exlcusive to Vodafone when it goes on sale in the UK

While 2010 was undoubtedly the year of the Apple iPad, 2011 has a good chance of being the year that Android comes of age.

The original 7-inch Samsung Galaxy Tab was the only major iPad competitor to be released in 2010, but it was hampered by the inclusion of Android 2.2 – very much an OS designed for mobile phones rather than tablets.

However with the release of the tablet-tastic Android 3.0 this year, the iPad 2 is about to come up against some serious competition.

Our colleagues at T3.com grabbed some Samsung Galaxy Tab 10.1 video footage which you can watch below.

To clear up any confusion, there are actually two different versions of the Samsung Galaxy Tab 10.1. There's the original version (read: the one that was announced first) – which is the one we have here – and a revised version.

The original version was ditched in many territories before it even went into production, in favour of a slimmer, less highly spec'd version without the 8MP camera. However, in the UK Vodafone signed an exclusive deal with Samsung to sell the original model, and here it is.

The upshot of all this is that here we have the newly-titled Samsung Galaxy Tab 10.1V, while the newer version - which will come packing Samsung's Touchwiz overlay - will be known simply as the Galaxy Tab 10.1.