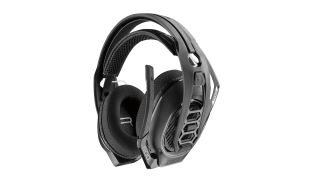 Plantronics has shown off its Atmos gaming headsets for the first time, and we had a chance to have a listen to them for ourselves.

When the company announced the new line of Xbox One and PC headsets back in June, it proudly advertised that they were the result of an 'exclusive' partnership with Dolby to provide Dolby Atmos to gamers.

The list of Atmos-enabled games is currently short. On the Xbox the technology will be embraced by Gears of War 4 and Crackdown 3 later this year, while on PC you can currently experience the technology in a number of titles including Star Wars: Battlefront and Overwatch.

In our demo Atmos continued to be just as impressive as ever. We were treated to a segment of Star Wars: Battlefront which received Atmos support on the PC last year, and we came away thoroughly impressed by the sound of TIE fighters screeching overhead, and the sound of lasers whipping passed us.

You'll have to wait for our full review to hear our complete thoughts on the headsets, but our initial impressions were positive.

But before you rush out to buy a pair of Plantronics new headsets, there's something you need to know about how its Atmos integration works.

When Microsoft announced that it was bringing Atmos support to the Xbox One back at E3, it promised that the hot new audio tech would work with any pair of headphones.

So what does Plantronics' exclusive Atmos partnership actually mean then?

The crux of the issue is the fact that if you want to use Atmos with your headphones, then you'll need to purchase a license from Dolby which retails for $14.99. Otherwise you'll be stuck with Microsoft's own surround sound technology, 'Windows Sonic.'

What Plantronics has managed to negotiate is to include this license in with its headphones. You'll get a code to activate it in the box, after which point you'll be able to enjoy the new audio tech... with whatever pair of headphones you choose.

This also means that if you have an existing headset that you like to use, then you'll be able to buy this code separately without having to buy new hardware at all. Sorry Plantronics.

Still, the headset manufacturer should be applauded for simplifying what Microsoft has turned into a needlessly complicated process with the inclusion of the $14.99 code.

But if you're not in the market for a new headset, and want to try out Atmos for yourself, then you might want to try purchasing the license as a standalone before shelling out for a whole new headset.