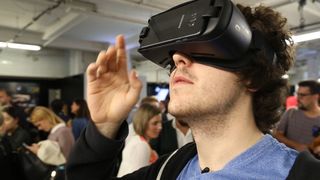 Samsung launched the brand new Galaxy Note 7 at a trio of events in New York, London and Rio – but it wasn't just the phablet taking center stage. It was joined by an upgraded Gear VR headset too, and we've been hands on to find out what's changed.

The big difference is the larger lenses, giving you a wider field of view for a more immersive VR experience. The controls on the right of the headset have also been given a tweak, and a home button has been added for easier navigation.

Finally, instead of a microUSB connection the new Gear VR has a USB-C pin, allowing it to plug in nicely to the Galaxy Note 7. An adapter is included in the box so you can use your older Samsung flagships though.

Check out all the new features in our new Samsung Gear VR hands on video below.