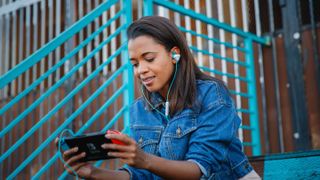 Here’s the dilemma: thanks to the introduction of Fortnite on phones and Nintendo Switch creeping up the list of the most popular consoles, gaming is increasingly something we do away from our house. That's not a problem per se, but lacking accessories when we game in the great outdoors certainly is.

To ride the wave of handheld hysteria, Turtle Beach has just announced a new line of portable, lightweight headsets called Battle Buds that will be sold exclusively at Target and online at Turtle Beach's website.

The Battle Buds will come in two color options - black/silver and white/teal - and are compatible with nearly all mobile devices, the Nintendo Switch, Xbox One, PS4 and PC. Best of all, they'll come in at just $29 (around £22, AU$39).

The headset features two microphones - one detachable, high-sensitivity boom mic and a microphone built into the in-line controller for taking phone calls. That in-line controller also allows you to access your personal assistant and the mic mute button when you need to quickly mute your mic.

Whether your online teammates are cool with you wearing a highly sensitive microphone around noisy street corners and crowded shopping malls remains to be seen, but if nothing else, the Battle Buds give gamers some flexibility to play (and talk trash) in more places.