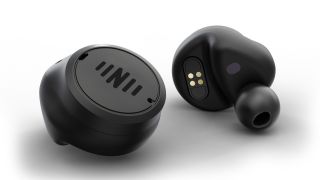 Going into CES 2020, we predicted that smart hearables would be a big trend of this year’s show. Not to blow our own trumpet too much, but we were absolutely, inarguably bang on the money.

We’re not talking about your latest pair of Sennheisers, but true wireless headphones on steroids; those that go beyond bass and treble and into the territory of smart features and even assistive hearing.

In 2017 a new law was passed allowing hearing aid-type devices to be sold over the counter, rather than having to go through a licenced medical professional. This has opened the door for tech companies to swoop in and market earbuds that act as hearing enhancement devices as well as streaming music. And at CES, they came in droves.

We wrapped our hands (and ears) around some of the most interesting smart hearables at CES 2020. Here are the ones that stuck out for us.

At CES, the smart hearing company Nuheara unveiled its latest creation, a pair of headphones that use AI to calibrate the sound to your personal profile (pictured above). During setup you’ll be prompted to conduct a NAL-NL2 hearing test in order to assess your hearing and determine how the earbuds should be tuned.

There’s active noise cancellation and Nuheara deploys its Speech in Noise Control to enhance speech in noisy environments, with three microphones to analyze sound inside and outside of the ear.

Finally, Nuheara boasts that they’re also great for music listening, and having tested its previous headphones we’re inclined to believe it.

Olive Smart Ear currently exists as a single earbud, but at CES the company revealed it’s working on a headphone pair called the Smart Ear X, set to launch later in the year. Olive is designed to help those with hearing loss while removing the stigma that comes with hearing aids, but it can also benefit people who wouldn’t otherwise wear an aid at all.

The earbud will filter out disturbing background noises, while the app lets you switch between different modes - one for conversations and another for watching TV. The existing Smart Ear can also be used for taking calls, but the Ear X will have two earbuds so you can also listen to music.

Huami announced two pairs of headphones at CES. The first were the PowerBuds, which offer heart rate monitoring and - so says Huami - stellar sound. But we’re more interested in the Zenbuds which will try to succeed where Bose’s noise-masking sleepbuds failed.

With a snug in-ear design, the Zenbuds will block outside noise and play gentle sounds to soothe you into sleep. Huami says that the earbuds will actually stop playing sounds once you drift off, which it will presumably know from using the heart rate sensor. Said sensor will keep tracking your heart rate through the night, while the sleep position monitor does exactly what you think. Oh, and once it’s all over there’s a gentle alarm tone to wake you.

They’ll be available later this year, and expect them to come in at a good price.

Lizn is another hearing enhancement company, but one that’s gunning for all ears. Its ‘hearpieces’ are designed to “improve your face to face communications” by filtering out background noise and giving conversations more clarity. On top of that, they can play music and give you access to Siri/Google Assistant.

The earbuds are pretty discreet and come in black, red, or “Caffe Latte” color variants. We got to see them working on the show floor, so they’re well beyond concept stage. In fact, the company is taking pre-orders now with an estimated shipping time of February or March this year. They cost $149, which isn’t bad at all.

One of the less “smart” devices on our list, the TicPods 2 still try to go beyond your average earbuds. They look very similar to Apple’s AirPods and similarly come in Pro and non-Pro variants. We got to try the new Pro model at the show, and most of the smarts lie in the assistant and gesture controls.

Tico, Mobvoi’s assistant that can be woken with a “Hey Tico,” is pretty rudimentary as far as assistants go; good for answering calls and other minor things, but it isn’t smart in the same way Alexa is. It does however also function as a direct line to your phone’s smart assistant. So iPhone owners need to say “Hey Tico” and Siri will wake up. Yeah, it’s a little confusing.

There are some gesture controls too: nod your head twice to answer a call or shake it twice to reject it. It feels a little silly, but Mobvoi says Tico can also be called on to answer calls. The best bit is the price: $99 for the TicPods 2 and $139 for the TicPods Pro.

Among the hearing tech companies we spoke to at CES, there was an interesting point of diversion: should hearing enhancement buds be made to look more like hearing aids or less? Some believe it should be about making these devices as small and discreet as possible; for others, making them look larger and more like headphones wipes away some of the stigma that comes with wearing a hearing-assistive device.

Eargo falls into the former camp, but to an almost ridiculous degree. These things actually disappear into the ear canal so they’re very hard to spot. The latest model, shown off at CES, is the Eargo Neo HiFi and costs a whopping $3,000. However, that’s because Eargo claims this is a more serious hearing device, one that’s fully personalized to your habits and lifestyle. The company says that with the charging case, these can run for up to a week of power.