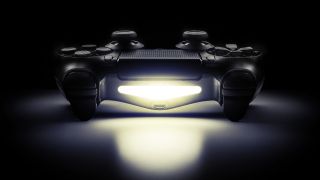 Voice control in the PS5 controller would be a major upgrade over the DualShock 4, above (Image credit: Akirbs / Shutterstock.com)

We've all experienced it – that moment when you've sunk hours into a game only to be hit by a doozy of a puzzle or a monster of a boss that stops you right in your tracks. But what if you could just ask your console for help instead of having to whip out your phone and Google a guide? Well, Sony may let you do just that with the PS5 controller, according to a new patent.

This Sony patent (published by WIPO and spotted by SegmentNext) describes "a controller device that is held by a user's hand, including a microphone, a tactile presentation device that presents a tactile sense to the user's hand, and a speaker.

In other words, the controller can accept voice commands through its built-in microphone, much like smart speakers such as Amazon' Echo range.

Whether this patent is for the PS5 controller is still speculation, but it lines up with several Sony patents we've seen before that have suggested voice commands will be coming to the PS5.

Previously, patents for what seems to be the PS5 controller have suggested the new gamepad will include a built-in microphone. While the inclusion of that may seem slightly odd – it wouldn't be replacing a gaming headset – when put together with this new patent, it starts to make sense.

And it makes even more sense when we consider another patent that Sony filed last September, for an AI-powered voice assistant called 'PlayStation Assist'.

This voice assistant reportedly would be able to dynamically respond to queries and provide "gaming assistance", such as pointing out health packs on a map or reminding you what your objective is, similar to what Google has said its Stadia controller will do.

Sony has filed a new patent for an AI powered voice assistant called PlayStation Assist. You can input a query and then the game will dynamically respond. E.g. Ask for the nearest health pack > The game marks it on your map.https://t.co/BQWibOqSRP pic.twitter.com/PNKDEH7jGeSeptember 29, 2019

So it could be that this patent for a controller with a voice command system refers to the PS5 controller, which may work with PlayStation Assist.

It's worth noting that these patents may not be linked, and the devices described in them may never see the light of day; however, we certainly wouldn't be surprised to see Sony add a voice command feature to the PS5 controller.