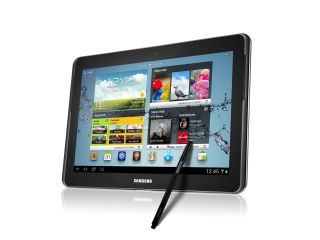 Samsung has told TechRadar that it's looking at adding NFC to its tablet range to help create a more connected ecosystem of devices.

The Korean brand currently has NFC-enabled phones like the Samsung Galaxy S2 and Samsung Galaxy Mini 2, but adding the functionality to tablets would help it extend its promise of a 'connected home'.

Matthew Brum, head of product management at Samsung, said that although nothing had been decided with regards to exact product launches, contactless technology would be a good addition to its tablet range:

"NFC is about solutions, and [putting the technology in tablets] is something that there are discussions on internally.

"Initially the technology has been all about payment, and tablets have been more of a home-based device, but there is work ongoing [to add NFC in]."

"The connectivity between a tablet and a smartphone, to help us sell the 'connected story' makes a lot of sense."

If consumers were able to sync up devices between one another simply by touching to initiate a streaming relationship or transfer of information, it would be a big boon to the nascent NFC technology.

Others, such as Sony and RIM, have been experimenting with NFC-based communication between devices, so it will be interesting to see if Samsung decides to follow suit in 2012.