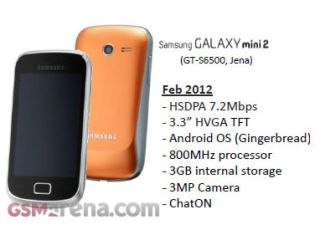 Let's all jump on the Galaxy bandwagon

The refreshed mini will pack a 3.3-inch HVGA display, a faster 800MHz processor and 3GB of internal storage which are all improvements on the original and the internal memory is impressive for a budget phone.

The Galaxy Mini 2 is also reported to feature a 3MP camera and run Android 2.3 (Gingerbread) but with a small screen we reckon basic stuff like using the keyboard is going to be tricky.

With shipping rumoured to start in February, we expect to see the Galaxy Mini 2 feature at MWC 2012 in Barcelona and we will see if it offers something uniquely different to Samsung's other budget devices.

Lacklustre naming regimes aside, does the Korean giant really need to plunge another device into the budget market which will see it line up in direct competition with other Samsung devices such as the Galaxy Y and Galaxy Ace? Let us know your thoughts.

From GSM Arena via T3