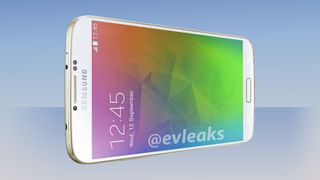 Is this the Galaxy F?

Even after the launch of the Galaxy S5 LTE-A rumours are still persisting around the Samsung Galaxy F and Galaxy S5 Prime, with the latest coming from that now well known Twitter leaker.

This time @evleaks has posted what appears to be a press image of a Samsung handset he claims is the Galaxy F and while it does have a gold finish it's apparently a different shade to an image posted previously.

Tagged "glowing gold", @evleaks states that this is a different shade to the "perfect golden" hue mentioned in an earlier tweet. However, it's not clear whether the newest colour replaces the earlier one or if both will eventually be available to buy.

He stresses that this is a separate handset to the supercharged S5 LTE-A, and concludes the post with "2014", suggesting we're still on track to see the Galaxy F before the year is out.