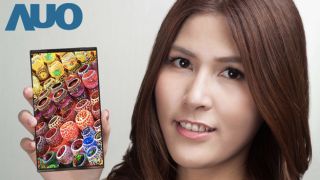 AUO's new display is the highest res AMOLED panel yet

Samsung has been working on next generation QHD AMOLED screens for it's mobile devices for quite a while now, but it won't be the first to bring the tech to market.

That accolade goes to Taiwanese firm AU Optronics, which has developed a 5.7-inch panel boasting a resolution of 2560 x 1440, the highest yet for any such display.

The display, which is just 0.57mm thick brings a eye-popping pixel density of 517ppi.

AUO will seek to push the tech to its various customers, which include Samsung.

Samsung confirmed in January that a QHD display was on the horizon, with many expecting the tech to appear within the newly-released Samsung Galaxy S5.

That, of course, wasn't the case, but perhaps Samsung could have it ready for the Galaxy Note 4, expected to launch at IFA in September?

LG is also thought to be considering a QHD panel for its forthcoming LG G3 release, so in one way, shape or form, we may see the display tech in a mobile device this year.