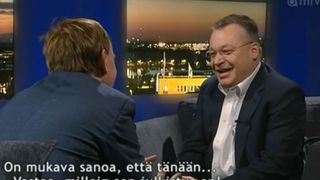 What do you have to say, Stephen?

The bond between Microsoft and Nokia may have narrowly missed getting even closer, according to a report out today.

The Wall Street Journal has it on the authority of "people familiar with the matter" that Microsoft was as recently as this month in advanced talks with Nokia to buy the company's device division.

Though such a union would significantly alter the mobile phone landscape, the Journal's sources said the talks have broken down, with one person advising the discussions won't likely pick up again.

Price was apparently one problem for Microsoft, but another facet of its decision to walk away was Nokia's "strategic predicament" behind Apple and Samsung, while other firms are gaining on the Finnish firm.

The talks, which took place in London, sound as though they made significant headway and were even on the cusp of an oral agreement before Microsoft backed off.

A plus of buying the foreign company's device business, the Journal noted, would have been that Microsoft could have used its approximately $66 billion (about £42.6 billion, AU$70.6 billion) in offshore subsidiaries to seal the deal.

Nokia and Microsoft are already bedfellows as the phone maker made a commitment over two years ago to solely use Windows Phone in its handsets. While WP is inching upward, the partnership hasn't yielded the big returns either hoped for.

The news of Microsoft's hot-now-cold interest in Nokia comes one day after a Huawei executive commented that his company would be open to the idea of purchasing the maker of the Lumia 920.

Another executive later said Huawei has no plans to acquire Nokia, but didn't go so far as to say the Chinese hardware maker isn't considering it.

Despite its struggles, Nokia clearly has something to offer, and we doubt this is the last we hear of suitors looking for its phone-shaped hand.