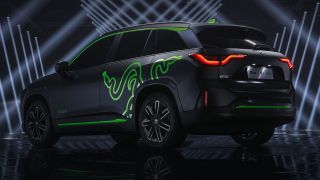 Razer, maker of award-winning gaming laptops and light-up toasters, has made its first foray into the automotive industry with the release of a heavily branded limited-edition electric car.

In January, Razer reported that it was working on in-car lighting for startup Leapmotor, but its newly unveiled vehicle is the result of a partnership with the established automaker NIO.

The all-electric SUV, the NIO x Razer ES6 Night Explorer, is now available to buy in China, though the run is limited to just 88 cars (eight being a lucky number).

In the coming years, the two companies will work together to create cars that are more mainstream and look a little less like gaming mice. Although not quite so ostentatious, these will still feature Chroma lighting in the cockpit, lighting that syncs with music from the entertainment system, and "game integrations".

These integrations might be similar to the newly released Tesla Arcade, which offers an array of games to keep drivers occupied while their electric cars are charging. Once full automation becomes a reality, motorists will be able to sit back and enjoy some gaming on the move as well.

It sounded deeply unappealing, but captured the imagination of gamers, who petitioned the company to turn it into a real product. In May, the company's CEO Min-Liang Tan finally caved to the pressure.