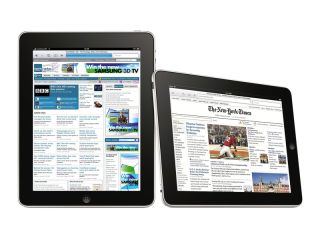 The strength of Apple's iOS is in its simplicity of use and bright, bold interface

Just as PCs and Macs run Microsoft Windows and MacOS X, so different tablets are based around different operating systems. The most popular of these is Apple's iOS found on the various iterations of iPad, but there are numerous alternatives from the likes of Google, HP, Blackberry and Microsoft.

Each comes with a set of pros and cons and will almost certainly influence your tablet buying decision, so here's our guide to every major system.

This is the operating system found in the iPad and iPad 2 and is also used in the iPhone and iPod Touch. The operating system debuted on the original iPhone in 2007 and was called iPhone OS. A different name became essential after the iPad was released and Apple announced the change in June 2010.

The big draw for iOS is its famously simple approach and healthy App Store - there are now 300,000 apps available, all of which have been vetted by Apple. Many of these are designed to work with the iPad specifically, though virtually all iOS apps will run on it - if they're designed for the iPhone and iPod touch the operating system will simply make the graphics bigger. This doesn't mean they look too hot, but they will run.

Not everything is a truly amazing app, but it does guarantee a certain level of quality that you often don't get with Android. The system works alongside the Apple App Store, which you can access either on your iOS device or using iTunes on your Mac or PC.

At the moment, iOS devices still need to be synchronised with your PC or Mac to download music, videos and the like. Of course, that's not to say you can't watch video streamed from the web on your device - indeed, once you have synchronised it, you can pretty much use it completely independently and just sync for major changes in your music library or system updates.

iOS' identity is through its grid-like layout which has been in place since the first iPhone. By default, the bar at the bottom of the iPad's screen includes the icon for your browser, mail, photos and music, though you can replace these with any icon you like.

The latest major update to iOS - version 4 - introduced folders to the OS so you can group icons and you can move icons between different home screens should you have enough apps downloaded. You're also able to completely configure your iPad through iTunes including the position of the apps and the apps you currently have installed on your iPad. Operating system updates are also available through iTunes.

Everything is controlled on screen with the exception of the single Home button, which takes you back to the home screen - in essence enabling you to start again. Everything is contained within apps - some of which contain standard systems settings and functions such as the web browser.

The App Store's biggest boon is that you can find an app for just about anything - if there's a problem you need solving, you can bet there's an Apple app that will solve the problem. And it's not just a hotbed of development for small-scale software writers and companies, either.

Huge multinationals such as Sky, the BBC and newspaper groups have developed their own apps for the iPad in the hope that it will bring content to new audiences. Rupert Murdoch's News International has even started to produce a daily newspaper for the iPad, called The Daily with special graphics and videos.

The size of the iPad's screen has really got publishers thinking. Apple has created a compelling model for developers with iOS and some serious money has been made from the App Store. Most apps are free with plenty also paid for and they range from 59p to hundreds of pounds for specialist apps - you can even buy full-blown sat nav apps, too.

Subscriptions are also available inside certain apps - some newspaper apps are free, for example, but you have to pay an amount within the app for a year's subscription. The Guardian is a good example of this.

The future of iOS looks completely secure - the iPad and iPhone have been runaway successes - over 15 million first-generation iPads were sold and rumours are already circulating about iPad 3. The iPad 2 is currently the best tablet out there for the price and, while Apple's share of the market will fall in 2011, you can be sure it will continue to innovate.

One of Apple's strengths is that it continues to update products it has long since finished working on hardware-wise. Software updates mean that the first-generation iPad now has almost the same software functions as the iPad 2, even if the latter tablet makes more of the software advances because of its superior hardware.

Likewise, you're also able to get updates to apps you've already purchased - these are all downloaded via iTunes. Mind you, although Apple has had the tablet market pretty much sewn up, most of the slates this year will be launching with Android 3, which, as you'll read, is an operating system to be reckoned with.

Android tablets may be relatively new on the market, the Google-backed Android operating system phones will comfortably out-sell the iPhone in 2011. However, there are different versions of the OS available, which can make things a trifle confusing.

Virtually all of the new Android tablets are running version 3.0 of the software. This is dubbed 'Honeycomb' (all versions of Android have sweet food-related codenames) and has been designed specifically for use with tablets, rather than modified from a phone OS. Tablets such as the Motorola Xoom and Samsung Galaxy Tab 10.1 use Honeycomb. Some tablets released with older versions of Android.

It was rumoured that Google wanted all Honeycomb tablets to be dual-core, though this is something the company refuted. In truth, the original Samsung Galaxy Tab, Dell Streak 5 and Dell Streak 7 were released (or announced) sooner and came with Android 2.2. Dell has indicated that the Streak line will get an upgrade to Android 3.0.

The HTC Flyer tablet was said to run Android 2.4 when it was announced, however it wasn't available at the time of going to press and might well ship with Android 3.0 when it is released.

The main reason that the OS version is important is that the user interface is quite different. The older versions are more recognisable as the same interface that is shipped with phones. The interface on Android 3.0 is much more tailored to a broader tablet screen and is far more streamlined.

Android's big difference to iOS is that it doesn't rely on being connected to a PC or Mac for updates or synchronisation of music, for example. Everything, from your contacts to your email, is controlled online via Wi-Fi (or 3G if you have it) using your Google Account login - in other words, everything is stored online (if you've heard the expression 'in the cloud,' this is what it means).

Your Google Account is associated with your device. The advantage to this is that, if you lose your tablet, everything is backed up. The disadvantage is that Google has all the information from your contact details to your latest emails. Of course, this is all your information safeguarded by Google's Privacy Policy.

While iOS apps are administered through the App Store on the iOS device itself or iTunes on the PC or Mac, Android is a little different. Since there is no equivalent of iTunes for Android, the easiest way is to use the Android Market app on the device and download apps via Wi-Fi or 3G.

However, that's not where the story ends as the Android Market is also available online on your PC or Mac at market.android.com. If you sign in with your Google Account, any apps you choose to download (whether free or paid-for) will automatically download to your device even if you purchase them via the web - very clever stuff.

Google updates Android regularly, but with phones these updates have tended to come via the device manufacturer because of the various modifications they have chosen to make. However, Google hasn't been that impressed with this approach as the differing modifications have meant that there are tens, if not hundreds, of variants of Android on different handsets.

How this will play out with Honeycomb is anyone's guess - it's the first time Google has produced a laptop-specific OS, so it remains to be seen whether Google will roll out updates to all Android 3.0 tablets in one go, or whether it will have to produce updates via manufacturers once more.

Android's only downfall is that it's less foolproof than iOS and so might not necessarily be recommended for someone with no technical expertise - it really is a tablet OS for those who enjoy using a flexible operating system as opposed to something completely straightforward.

However, that's not to say Android 3.0 is difficult to use; it's a terrific, fluid operating system - absolutely ideal for tablets and a perfect antidote to those who feel iOS is too clinical.