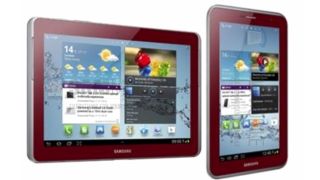 Samsung reportedly aiming for the heart with Galaxy Tab update

Samsung will give its Galaxy Tab 2 range of Android tablets a 'Garnet Red' paint job in a bid to snare Valentine's Day shoppers, according to reports.

The SamMobile site has unearthed a leaked image (above), showing the Galaxy Tab 2 10.1 and Galaxy Tab 2 7.0 devices in the purported new hue.

The site brought word from an unnamed tipster claiming the red devices, which will include the Galaxy Note 10.1, will be on sale before February 2103.

The report also states that no spec bump is expected alongside the romantic rouge overcoat.

Samsung made some early headway with its first Android tablets, but the Galaxy Tab and Note 10.1 slates have recently been overshadowed by low-cost, high-performance tablets like the Google Nexus 7 and the Amazon Kindle Fire HD.

Would a nice shade of red make you more likely to splash out on a Galaxy Tab, rather than a Nexus 7, for your loved one this February 14?

Let us know in the comments section below, you old romantics, you.