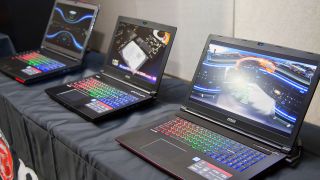 Just in time for the arrival of Nvidia's astonishing new mobile Pascal graphics cards, which the GPU maker claims offer levels of graphical performance that are indistinguishable from their desktop counterparts, Taiwanese hardware company MSI beat its competitors to the punch by being first to announce an incredibly comprehensive lineup of new GTX 10-powered gaming laptops.

For the launch of these (literally) game-changing notebooks, MSI flew us to its hometown of Taipei, Taiwan to get up close and personal with its beefy lineup, so that we could see if they could live up to the hype in person.

Hosting a presentation for all the global press in attendance, MSI was extremely eager to show how the performance of its gaming notebooks matches that of its top-end desktop PCs.

Though our hosts showed an apparent inability to end a sentence without repeating its 'Shatter Desktop Performance Cliché' motto, the company absolutely backed up its claims through direct 3DMark score comparisons against both desktop gaming PCs and unnamed competitor laptops.

Featuring GTX 10 graphics cards in the GT, GS, GE and GP series, each of these high-end notebooks is being positioned as VR ready and offers unique features for a variety of gamers.

Though all of the notebooks showcased were beastly in their own right, the GT73VR Titan SLI was perhaps the all-rounder that's geared directly to the most hardcore of gaming enthusiasts.

The GT73VR Titan SLI has a remarkably responsive 17.3" 120Hz/5ms display (the first of its kind to display in Full HD) and can come equipped with either dual GeForce GTX 1070 SLI graphics or a single GeForce GTX 1080. It's able to pump out games at up to 4K resolution, which should come in handy if you want to plug in some external screens to take advantage of the unit's three-monitor surround view mode capabilities.

The panel also boasts the ability to display 94 percent of the NTSC colour gamut and has 100 percent RGB colour calibration, so that colours are more realistic and vivid than any of MSI's previous gaming laptops.

Other key features of the GT73VR Titan include its "Cooler Boost Titan" design, which boasts dual Whirlwind blade fans with 29 ultra slim blades and 10-12 heatpipes, and exceptionally-loud Dynaudio speakers. An onstage demonstration/comparison with a sound level meter showed a general loudness of over 100 decibels emanating from the notebook's built-in speakers – much louder than the rival gaming laptop that was also tested, which topped out in the high 70s at full volume.

A GT73VR Titan SLI display unit was on hand for us to take a closer look at, and though we were already expecting a high level of graphical performance, a 3DMark 11 score of 20683 confirmed to us that MSI wasn't kidding about its claims of desktop/notebook equality.

Along with the Titan SLI, MSI also announced the GS73VR Stealth, a lighter, slimmer 17-inch model that's also capable of 4K gaming. The Stealth's body is made of high density aluminum alloy, with a brushed metal finish and stylish full-arc shape.

The Stealth opts for a GeForce GTX 1060 for graphics and features the same Cooler Boost Trinity cooling tech as its bulkier brother. It also has a SteelSeries gaming keyboard backed by SteelSeries Engine 3 software. You'll find the True Color Technology, ESS SABRE HiFi Audio and Nahimic 2 Audio Enhancer of the Titan SLI inside the Stealth's much slimmer chassis.

A lineup that's hard to beat

Though we've focused our attention mostly on the stellar GT73VR range, MSI actually announced 11 gaming notebooks in total, each packing similar grunt but also coming with their own individual selling points.

The GT83VR Titan SLI is MSI's showcase laptop for 4K and VR gaming, supporting dual GTX 1080 or 1070 SLI graphics. It's capable of outputting 4K at 60Hz to three external displays simultaneously, and has a Cherry MX mechanical keyboard with red-colour backlighting.