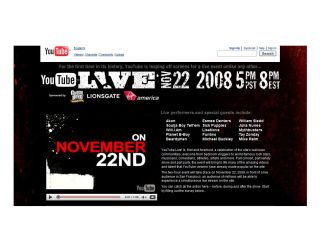 YouTube goes Live with a little help from its friends

Whether or not you watched any of the weekend's YouTube Live event on the video-sharing website is probably a matter of taste (if you have any, we bet you didn't), but how Google served up the live extravaganza is quite an eye-opener.

Because normal YouTube video is progressively downloaded by the viewer's computer, the demands of streaming a live event were something quite new for the site.

That's why even a lumbering giant like Google needed help with the technical things, in spite of the myriad resources at its disposal.

According to sources in the know, the company Google turned to was streaming specialist Akamai.

The YouTube Live planners apparently chose Akamai ahead of better-known streamers like Justin.TV because it was confident of handling the large number of viewers expected.

So far, it appears that around 700,000 people tuned in for the mostly hip-hop and 'street' show, proving the wisdom of the Akamai choice.

We just wonder how many of them were actually the money-earning adults Google needs if it's to generate significant revenues from YouTube.