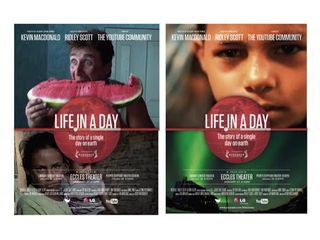 We like the look of the bit about the watermelon

Life In A Day, the documentary filmed by and starring thousands of YouTube users, will premiere at the Sundance Film Festival tonight.

YouTube users around the world participated in the Life In A Day project, produced by Ridley Scott, submitting video footage of their day on 24 July 2010.

If the trailer below is anything to go by, the film will make us weep and laugh in equal measures, as thousands of normal people share snippets of their lives via the magic of the internet.

Over 80,000 clips were submitted, leaving director Kevin Macdonald and his team to wade through the 4,500 hours of footage to come up with the 90-minute documentary.

MacDonald, who directed Touching the Void, won an Oscar in 2000 for his documentary One Day In September, which may sound similar to the Life In A Day project but is in fact about the murder of eleven Israeli athletes at the 1972 Olympics.

The YouTube documentary will be streamed live from Sundance at 1am tomorrow UK time, but will be re-streamed at 7pm on Friday 28 January for those who don't fancy staying up until the wee small hours.