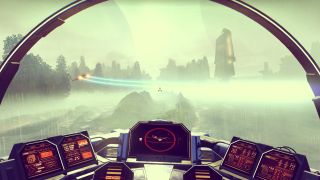 No Man's Sky is nearly here.

After what seems a very, very long wait, procedurally generated sci-fi adventure game No Man's Sky will finally hit the PlayStation 4 and PC later this week. You might want to set aside a chunk of time for installing it though: the day one update is a big one.

Game creator Sean Murray has blogged about the 1.0.3 update, which significantly modifies the game before you can dive in and start playing. If you don't want to know anything about No Man's Sky in advance, stop reading here.

There are now three "paths" you can follow through the game, Murray says, with early decisions affecting what you see later on. The development team has also "changed the rules of the universe generation algorithm" so the galaxies are larger and the planets are more diverse from the start.

The trading mechanics have been improved and there are now more ships and more resources to play around with, as well as a greater variety of terrain, atmospheres and types of planets to encounter. Auto-aim in combat has been "completely rewritten" and it's also easier to find other players in your travels around the cosmos.

Those are some hefty upgrades and Murray warns that if you've been playing a sneak preview of the game you'd be best of starting afresh - your saves will still work but you won't get access to the new content and experiences.

"For 99.9 percent of people, all you have to do is install the update before you begin to play," says Murray, and there's lots more to come. Regular (and free) updates will appear in the months ahead, apparently, with the ability to own bases and giant space freighters coming in the near future.

Is your PC VR ready? Are you sure?: