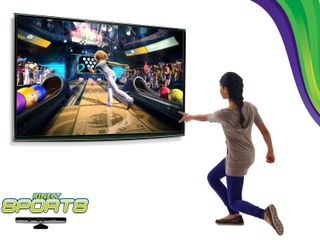 Kinect Sports revealed at E3 in Los Angeles this week

Lauded game developer Rare Studios has revealed that it has been beavering away on a sports game for the newly-announced Microsoft Kinect.

Kinect Sports (obviously!) is set to be one of the major launch titles when Microsoft's new motion controller arrives in stores later this November. It will inevitably be compared and contrasted with Nintendo's hugely-successful Wii Sports titles.

Bowling the night away

Kinect Sports: This is the future of your lounge

Kinect Sports: Football as you've never experienced it before

Kinect Sports: Table tennis, or ping pong, or whatever

Kinect Sports: Volleyball the day away

Kinect Sports is something of a departure for a studio more commonly associated (amongst gamers) with classics such as GoldenEye and Banjo-Kazooie for the Nintendo N64.

The boxing mini game in Kinect Sports uses your Xbox Live avatar, which will inevitably cause Nintendo fans to call 'copycat'.

Whatever. Football, bowling, table tennis and boxing were all invented before the Wii, yet nobody accused Nintendo of 'copying' those games!

The bottom-line is the fact that Rare makes fantastic videogames, so we look forward to trying out Kinect Sports when it arrives later this November.