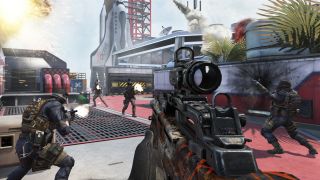 Top of the pile

For the first time almost since Microsoft started taking votes on which games should get the Xbox One backward compatibility vote, Red Dead Redemption has dropped from the top spot.

It obviously had to be a Call of Duty title which took the top spot and it's Black Ops 2 which has wrestled the lead away from Rockstar's third-person Western romp.

It's obvious because the monster franchise has a vice-like grip on the wishlist with half of the top ten being various iterations of the first-person shooter.

The backwards compatibility list is in place to give Microsoft an idea of the titles it needs to chase and plug into the upcoming Xbox One feature. At the moment it's only available to the Xbox Preview Members, but the feature is likely to go live with the big holiday gaming push towards the end of the year.

Microsoft was being rather conservative with its estimate on the number of games that will be available to the service when it goes live, figuring that by December it would be around 100 classic Xbox 360 titles.

So you want to make sure it knows the favourites to add to that shortlist.

It's still a close run thing up top, with the top CoD game garnering over 78,000 votes with Red Dead Redemption following with 76,000.

The Elder Scrolls: Skyrim is the closest of the rest of the pack on 70,000, but the rest are falling further behind.

If it were based on the comments thread though Black Ops 2 would be running away with it.

The same would be true if it was based on the vitriol evident in those comments too - the thread is almost as verbally violent as the game world itself...