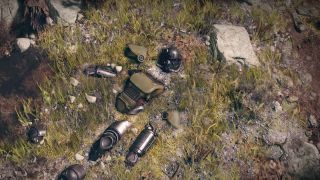 War, war never changes – but Bethesda games, huge as they are and inevitably buggy as a result at launch, do. That's why its latest release, multiplayer-focussed Fallout 76, is getting one of the largest post-launch patches we've seen in recent memory on the PS4.

Weighing in at 47GB on Sony's console, that's not far off the game's initial 53GB installation size. It levels out at roughly the same size as that first installation once unpacked too, suggesting this is primarily a clean up job, rather than introducing a host of new elements.

On Xbox and PC it's a more palatable 15GB, however.

The majority of changes come to the PvP elements of the game. According to the patch notes:

General bug fixes across the game are also covered, including a particularly nasty one that prevented players from finishing the Bureau of Tourism quest.

Thankfully for those counting their broadband download limits, patches of this size are likely to be rare in Fallout 76's future.

"This update will be large compared to what we expect for patches going forward," Bethesda said.

"Regular updates will always vary in size, but future updates should be much smaller in comparison. Our plan is to update the game on a regular basis with patch notes that detail what we are addressing with each update."