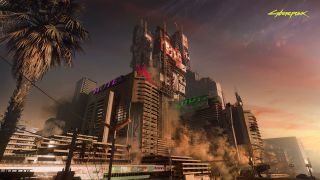 Can't wait to get your hands on Cyberpunk 2077, the hotly-anticipated sci-fi RPG from the makers of The Witcher 3? Then you'll be happy to hear that a prequel to the game is on the way.

But, while CD Projekt Red's Cyberpunk 2077 launches in April 2020 for PS4, PC and Xbox One, the prequel, Cyberpunk Red Jumpstart Kit, launches this August for a very different sort of platform: your table.

Yep, the primer for the videogame will be following on from the roots of Cyberpunk 2077's inspiration, landing as a starter kit for the tabletop RPG Cyberpunk 2020. If you weren't already aware, the upcoming video game will be based on a pen-and-paper RPG from 1988.

In a wise move, the new game will be a beginner-friendly pack, giving you everything you need to get up and running with the game, and get a taste of the universe's lore before the videogame launches.

The pack will include a full adventure scenario for brand new players, in-universe news cuttings, a set of six character templates, four maps, custom dice and a lorebook. It'll launch on August 1 at Gen Con 2019 in Indianapolis, as well as a digital copy at DriveThruRPG.com for $29.99 (about £25 / AU$45), minus the physical goodies.