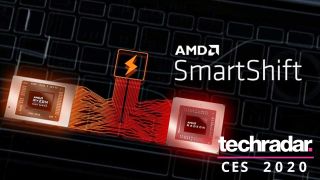 Could AMD hold the key to 8K gaming on the upcoming PS5 and Xbox Series X? After the company's CES 2020 keynote, where it showed off its potentially game-changing SmartShift technology, I think it does.

Ever since the PS5 and Xbox Series X were announced by Sony and Microsoft as next-gen consoles that would be capable of playing games at 8K, I've been wondering how these machines would be able to output at such high resolutions without being prohibitively expensive.

The reason I am sceptical of the two upcoming consoles' 8K ambitions is that I know how demanding – and expensive – gaming at 8K can be. I've used a powerful 8K gaming PC built by Chillblast, which includes a $2,499 (around £2,000, AU$3,600) Nvidia Titan RTX graphics card to play a number of games, including Red Dead Redemption 2 at 8K, and even with the expensive setup, it's still difficult to get high frame rates.

The issue for both Sony and Microsoft is that there's no way their new consoles will have that kind of spec, or sell at anywhere near that price. Both companies have been burned by selling consoles above $500 (with the PS3 and Xbox One, respectively), so I expect them to price their next-gen offerings much more competitively.

Another issue is size. Games consoles traditionally need to be smaller and more compact that gaming PCs, and while Microsoft seems to be working on a bulkier, more PC-like, design for the Xbox Series X, both companies will still need to include components that are powerful enough to drive 8K games, while also being energy efficient, so as to not produce lots of heat that will require larger designs, and be affordable.

That's almost an impossible ask right now. So what can the console makers do?

AMD to the rescue?

It seems like a possible answer to Sony and Microsoft's 8K conundrum has come from a slightly surprising source: AMD's keynote presentation at CES 2020.

During the keynote, AMD announced its SmartShift technology which will be present in its upcoming Ryzen 4000 mobile processors.

Basically, SmartShift is a smart power distribution technique that allows gaming hardware to dynamically adjust the power consumption of the CPU and GPU depending on what sort of tasks you're performing.

So, if you're doing CPU-intensive tasks, the processor can use up more power, giving it a boost in CPU performance.

Then, if you're playing graphically-intensive games, SmartShift can increase the power to the GPU, potentially allowing the hardware to achieve higher resolutions and better frame rates.

Crucially, AMD promises that these performance increases are 'free', so you're getting better performance without needing more expensive parts, while also keeping power consumption as low as possible – as the power supply to the GPU is lowered during CPU-intensive tasks, and vice versa.

AMD has release a video (which you can view below) which explains the tech in more detail.

Of course, SmartShift technology will only be available to devices that run both AMD CPUs and AMD GPUs – which, coincidentally, both the PS5 and Xbox Series X will.

So, could SmartShift come to the new consoles, allowing them to achieve the high resolutions they promised? I think it's rather likely, and if it's not exactly the SmartShift tech AMD has made for its Ryzen 4000 chips, I'd wager that some form of it will be used in the new consoles.

Now, no matter how good SmartShift will actually be, it won't magically allow cheap, under-powered hardware to pump out 8K graphics that previously only ultra-expensive components could manage, but it might be the key to how the PS5 and Xbox Series X will be able to achieve 8K visuals considering the price, size and spec limitations they have.

One of the benefits of closed systems like consoles is that the manufacturers, and game developers, can really optimize the games to eke out as much performance as possible. While SmartShift won't conjure up 8K visuals from nothing, it could be a powerful tool to help the next gen consoles realise their 8K ambitions – so I'd be very surprised if it wasn't included.