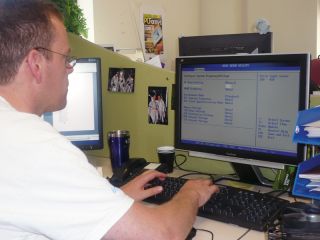 The main advantage to underclocking, also known as downclocking, is that it enables you to throttle back on your fan speeds. This in turn means that your machine doesn't produce as much noise as it would if left at the intended speed.

Downclock your processor enough, and you may even be able to get away with passive cooling – which is perfect if you're looking to build a media server for the living room, and don't want your films spoiled by the dull hum of fans.

It's a worthy goal aiming for the silent PC, and while the likes of the hard drive and PSU will add to the overall sound levels, it is definitely possible to go silent everywhere else.

You do need to be careful with this though – and may need an exhaust fan still, but being able to knock out any fans is worth while, and you'll soon notice the difference.

It's worth noting that underclocking is a lot more commonplace than you may think as well. Indeed it's the basis of Intel's SpeedStep and AMD's Cool'n'Quiet technologies, which are primarily used in laptops.

Whenever your laptop is unplugged, there's a good chance that it'll ease back on the clocks a little so that your battery life lasts that little bit longer and so the fans are running at full whack the entire time.

If your particular laptop processor doesn't support automatic downclocking itself, then following this guide can add to the stamina of your battery, and lift the pressure off the system fans at the same time. It's worth checking your BIOS for both technologies as well - use them if they're there.

Next Page Downclocking: How to run your machine quieter
See more Processors news