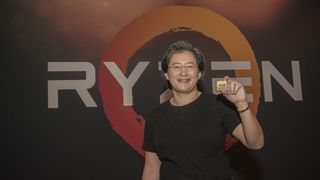 CES 2019, the world’s biggest consumer electronics show, is still months away. But it looks like AMD wants to set the tone by teasing that the company will announce the world’s first 7nm high-performance CPUs and GPUs at the event.

AMD announced its President and CEO, Dr. Lisa Su, will host a keynote to announce these game-changing processors and graphics cards developments at the 2019 Consumer Electronics Show. Going by the roadmaps AMD set for itself at CES 2018, we’ll see the introduction of Ryzen 3rd Generation and Ryzen Threadripper 3rd Generation CPUs built upon a 7nm Zen 2 architecture as well as 7nm Vega GPUs.

AMD claims it will “catapult computing, gaming, and visualization technologies forward with the world’s first 7nm high-performance CPUs and GPUs.” Given the improvements seen from Ryzen 2nd Generation and Ryzen Threadripper 2nd Generation, we have no doubt AMD will deliver even more powerful and impressive processors in the near future.

That said, we’re much more curious about AMD’s upcoming 7nm graphics cards and how they’ll rise to the task of competing with Nvidia’s Turing graphics cards – and potentially Intel’s own GPUs as well.