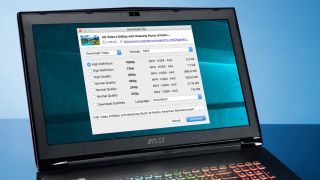 According to YouTube, it’s currently serving up more than 5 billion video views every day and the average viewing session is 40 minutes. That’s a lot of skateboarding cats, but it’s also a lot of data to download. If you’re on a capped mobile data plan, have a sketchy internet connection or will be travelling in places where getting online isn’t likely, that’s a problem.

A stream is only as good as your internet connection, and if that connection is slow, patchy or congested then you’ll spend more time buffering and uttering expletives than you will get to spend actually watching anything.

In many cases even good internet connections don’t deliver full quality all the time. That’s because video sites use a technology called adaptive streaming, which automatically adjusts the video bitrate according to network conditions. You might find that if you live in a busy street the quality of your video streaming drops considerably at peak times. That’s because everybody’s going online at the same time, causing the electronic equivalent of rush hour traffic.

The good news is that there’s a solution. Instead of streaming videos every time you want to watch them, why not download them once and view the download instead?

The short answer is 'uhhhh…' and the longer answer is 'maybe'. If it’s a publicly available video and you’re downloading it purely for personal use then you probably won’t end up wearing an orange jumpsuit and making weapons out of toothbrushes.

However, unauthorized downloading is very much against YouTube’s terms of service, which state clearly that downloads are only permitted if YouTube itself offers them via a download link.

Vimeo is a bit less clear in its terms, conditions and guidelines, noting that while it respects content owners’ rights to choose whether or not to offer downloads of their videos it’s up to them to pursue any piracy.

It’s worth asking what you want to do with the video you’re planning to download. Are you downloading it so that you can share it with others on a peer to peer network? Don’t do that, because it’s illegal: you’re actively distributing other people’s content without permission, and that’s against the law pretty much everywhere. If you want to spread the word about a video it’s much easier – and actively encouraged by YouTube and Vimeo – to do it legally and use the site’s built-in share buttons, which you can use to email or embed videos or to share them on your favourite social networks.

Ultimately unauthorized downloading is something you do at your own risk: if you do it a lot, Google may kill your account or your ISP may impose restrictions.

YouTube used to deliver video in Flash, which was a real pain: downloaded .FLV files didn’t play nice with the most common media players. Now, though, it produces video content in a range of formats and resolutions, and that makes it easy for third party apps to offer a range of download options.

In most cases the best video quality you’ll find on YouTube is 1080p, which is 1920 x 1080 resolution. That’s full HD. Next best is 720p (1280 x 720), which is the lowest resolution that can call itself HD. Many videos are in much lower resolutions, especially if they’re quite old.

YouTube has supported 4K video since 2010, but it has very specific requirements: if your browser doesn’t support the VP9 codec, YouTube won’t give you 4K video. On Vimeo you’ll find some videos in 2K resolution, which is twice Full HD (2048 x 1080), but most download services and apps don’t go beyond Full HD.

For most downloaders the best format to use is MP4, which works on pretty much anything, but the quality you get depends on the quality of the original upload. For example, as we write this we’re watching a Linkin Park video; its maximum quality is 360p because that’s the resolution it was uploaded at. Avoid formats such as 3GP/3GPP unless you’re downloading for use on a fairly old phone: 3GP files are tiny because they were designed for 3G mobile phones, and they look pretty rotten on more modern devices.

Unless you’re on an unlimited data plan, don’t download on a mobile data connection: you’ll hit the cap in no time and out-of-plan mobile data is frighteningly expensive. Wait until you’ve found a decent Wi-Fi connection and do your downloading over that.

Can you download video without sound, or sound without video?

Yes. Many downloaders such as Save It Offline enable you to download video-only or audio-only. As with normal downloads, the available quality depends on the original upload. Don’t expect to get high-res audio from a 360p video.

If you’re wondering why anybody would want an audio-free video, it’s handy if you want to use video clips in a documentary or presentation that already has audio in it, or if you’re making a mashup of multiple sources, or if you’re intending to use your own audio in place of the original. And audio-only clips are useful because for many people YouTube is their number one source of new music: why download the video bit if you want to listen, not watch?

Current page: What you need to know about downloading HD videos