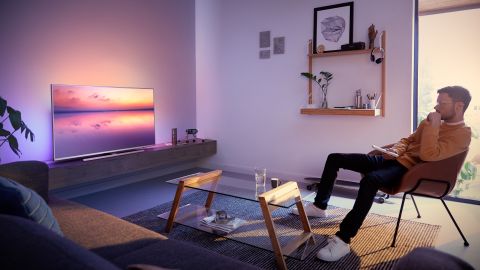 As affordable as it is formidable, the Philips 6800 4K UHD TV combines universal HDR support with romantic Ambilight – and it’s a great gaming telly too.

When it comes to AV value, there are few screens out there which deliver as big a bang for your buck as Philips 6-series models. Advantageously priced, with a specification borrowed from models several notches up the price ladder, they often make a great case for not spending more than you have to.

This season’s new Philips 6814 TV is a case in point. It offers three-sided Ambilight, plus core streaming services and Freeview Play catch-up, plus support for both HDR10+ and Dolby Vision.

Philips may well have some new mid-range sets in store for IFA 2019, but for now, read our full Philips 6814 TV review below.

With its light silver bezel and snowy-white back panel, this screen looks positively fashionable. Tiny LED bulbs, uses for the set’s Ambilight projection, decorate the rear of the panel too.

Connections include three HDMI inputs (one with ARC), two USB, component video with stereo phonos, Ethernet and a digital audio output for connection to a soundbar. All HDMI inputs support 4K UHD 3840 x 2160 @60 Hz. There’s dual-band Wi-Fi if you’re not able to hardwire your network connection.

The screen comes with a matching white remote control, distinguished by dedicated buttons for Netflix and Rakuten TV.

The Ambilight system itself is unchanged from what we’ve seen before, throwing a colour wash onto the wall behind the television to match the colours being shown onscreen and up the atmosphere. You can set the lights to Follow Video, Follow Audio, Follow Colour or Follow Flag; the last being a sports centric option that allows you to cast the colours of a favourite national team.

While Ambilight can be distracting when watching a movie, it works wonderfully well with sports, music and games.

Design TL;DR: We love the crisp, clean good looks of the grey and white cabinet, but can’t help feeling a little short changed by only three HDMI inputs.

The 6814 fully network connected, using Philips own Linux-based Saphi Smart TV operating system. This might not have the firepower of the Android TV OS, found elsewhere up the Philips food chain, but it’s entirely usable. Indeed, simplicity is one of its attractions. For UK buyers there’s Freeview Play, which guarantees all the main catch-up TV services (BBC iPlayer, All 4, ITV Hub) are onboard.

Freeview Play also incorporates a roll-back programme guide with easily accessible catch-up from all the main TV services, on programmes designated by a Freeview Play logo.

The TV supports Miracast and is DLNA compatible. Once networked, it immediately identified Plex and TwonkyMedia servers, and had no problem playing back our MKV NAS library. It’s also compatible with AVI, MPEG and VP9 codecs.

Smart TL;DR: Simple and sassy, the Saphi smart platform is an intuitive OS and, with Freeview Play, ensures all the key streaming apps are on hand, including Netflix with Dolby Vision.

Philips awards this set a 1200 Picture Performance Index. Of course, such marketing gobbledygook tells you little. But let us assure you: these HD images rock.

1080p detail jumps off the screen, while colours are bold without being overblown. Picture Styles (presets by any other name) for the 6814 comprise Natural, Standard, Movie, Personal, Monitor and Vivid.

When it comes to HD content, we found the Natural preset upped the contrast more than the Standard setting. We were less enamoured with Movie mode, as all image sharpness enhancements are turned off, making for a rather dull picture.

Significantly, there’s uniform luminosity across content. SDR allows the panel to shine in terms of brightness, be it tuner HD or 4K SDR from a Pay TV provider.

The caveat is black level performance. The set really isn’t able to deliver a convincing black level, made all too obvious if you watch in no-light conditions. Far better to view with some ambient light, or Ambilight providing some support from the rear of the TV, to get some better subjective contrast.

Generally you’ll probably want to avoid SD (standard definition) fare, though. The TV really doesn’t have the picture processing chops to convincingly upscale sources of that low a resolution.

With a UHD content source, the Philips 6814 has an opportunity to really hone its image. So how does it fare?

Screen uniformity is reasonably good, but not perfect – and the panel doesn’t hold colour and contrast well when viewed from the side. Our advice would be to park it as square-on to your viewing position as possible.

The provision of both HDR10+ and Dolby Vision HDR at this price point is a potential game changer when it comes to picture performance.

That's because the provision of dynamic metadata HDR support is actually more valuable on lower cost – and, by default – lower brightness HDR displays like the 6814. This helps it manage tone mapping, allowing for more efficient use of the set’s native brightness.

While the 6814’s colour performance lacks the deep WCG (wide colour gamut) possible from an OLED panel, it doesn’t disgrace itself. There’s undeniable vibrancy here. The trick, however, is to select the right image preset – the Vivid mode is too oversaturated to really recommend, and HDR movie mode looks somewhat flat during daytime viewing. Most of the time, HDR Natural proves a consistently satisfying option.

The pricing of the 6814 may be mass-market, but there’s refinement in the package. For example, when playing Grand Tour on Amazon Prime Video, the screen will flash up a confirmation that the show in encoded in HDR10+. Little things like this will engage your inner AV nerd, and keep you informed of exactly what formats are and aren’t being displayed.

The set also offers a huge amount of customisation, far more so than you might think it warrants, given its mid-range proposition. Most users will be better served not altering the picture settings too much. (If you do, FWI Ultra Resolution is best left On, and Dynamic Contrast kept to a Minimum.)

We measured peak luminance at a consistent 350 cd/m2 (aka nits), in both Standard and Vivid modes. This is in line with last year’s 6 series screens. While not bright enough to give a real lift to specular detail, the panel did stop HDR content from dropping too much in brightness.

While the screen can look properly cinematic, the set’s motion handling warrants cautious use. Image interpolation comes in Smooth, Standard, Sports, Movie and Personal Styles, but can be turned off altogether – while you’ll likely want to do for movies, though sports programmes tended to perform better.

Similarly, Philips’ MPEG artefact reduction is variable, but the setting is best kept on minimum.

One adjustment definitely worth making is Contrast mode. The default out of the box setting for this is Optimized, for energy savings. If you want the TV to perform at its best, switch to Optimized for Picture. This brings immediate benefits when it comes to highlight intensity.

Rounding off the 6814’s general good scorecard is its gaming performance. With Game mode engaged, we recorded image lag at just 19.1ms, compared to a tardy 123ms with the screen left in its Standard setting. That can be considered an excellent performance, and confirms this TV is a console gamer’s friend.

4k HDR TL;DR: Dolby Vision and HDR10+ compatibility help this screen make the most of HDR content sources, even if it’s not as bright as more expensive rivals. Fine detail performance is excellent.

The set also promises Dolby Atmos support, however a firmware update to enable Dolby Atmos was pending at the time of the review.  We don’t expect the downward-firing speakers to do a great deal with any immersive audio format though, to be honest.

This Philips offers a variety of Sound styles – Personal, Original, Movie, Music, Game and News – depending on what you’re listening to. The on-board amplifier is rated at 2x10W, so it’s got some welly too.

Positioned slightly up the price ladder (but not by much), is the Panasonic GX800. This mid-range offering boasts the same universal HDR support as the Philips 6814, including HDR10+ and Dolby Vision. It also offers a better image processor, though it lacks the lifestyle benefits offered by Ambilight.

Philips has produced another budget-busting winner with the Philips 6814. It looks smart enough, with its glacial white finish, and the inclusion of HDR10+ and Dolby Vision will likely tempt HDR format enthusiasts. Three-sided Ambilight, adding a light show beyond the screen itself, provides even more icing on the cake.

Some below-par upscaling from SD content stops this TV from getting a higher rating, as does the lack of Dolby Atmos support at launch. But those issues aside, the Philips 6814 is one we can certainly recommend for the price.