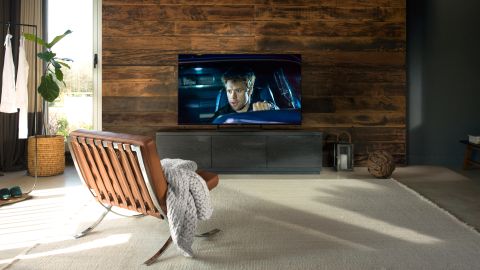 With the TX-50GX800, Panasonic has taken the 4K HDR market by the scruff of the neck and given it a vigorous shake. It ushers in Dolby Vision HDR, once the preserve of high-end premium screens, into the mainstream, and doesn’t discriminate against rival dynamic metadata standard HDR10+ either.

After the new 2020 model? Check out our hands on Panasonic HX800 review.

At first glance, the TX-50GX800 looks typically minimalist.  However closer inspection reveals it isn't quite as anonymous as first thought. The LCD panel sits on top of, rather than within, the surrounding bezel, for a stylish glass-on-frame appearance. As the set is edge-lit, it’s wondrously thin too.

It also adopts a convenient centre stand, so you'll not have to invest in extra wide AV furniture to accommodate it. Huzzah!

Stylish cosmetics don't extend as far as the remote control though, which remains congested and intimidating. It does sport dedicated Netflix and Freeview Play buttons though.

Connections are also limited to three HDMIs, plus two USB ports, digital optical audio out, component AV and Ethernet. The tuner in the UK version of the set is Freeview Play, but there's no satellite option. Wireless support includes Wi-Fi and Bluetooth.

Design TL;DR: Elegant design and sensible central pedestal should go down well with conservative fashionistas. Bluetooth connectivity supports headphone pairing (which is nice), but you only get three HDMI inputs (which isn't).

Panasonic continues to refine its own smart platform, rather than join the Android TV crowd,  and it’s clearly paid off here. Now up to V.4, Panasonic’s My Home Screen (aka ‘Home’) smart TV platform is light, breezy to use, and arguably the most approachable connected platform available.

The set supports both Google Assistant and Amazon Alexa smart integration too – nothing life-changing, but you can shout at your smart speaker to turn the TV on, if the mood strikes you.

The Home platform launches with a trio of buttons, ‘Devices’, ‘Apps’ and ‘Live TV,’ which fast track as expected. But the real fun begins when you customise the user interface. You can add your own short cuts for streaming services as well as connected devices; If you fancy Netflix front and centre, just pin it to the homepage.

The Device button lists locally connected sources, like set top TV boxes, Blu-ray player  or games consoles, but it also recognises networked NAS devices with media servers. Our Twonky and Plex media servers were instantly listed and their content playable. File support is good too: we had no problem unspooling our MKV files through the set.

The set has a wide selection of key streaming services on board, such as Netflix, Rakuten.tv, YouTube and Amazon Prime Video, as well as some lesser known streaming attractions.  The Freeview Play specification mandates a full selection of catch-up TV players, plus UKTV Play, CBS Catchup and Horror Bites.

The inclusion of a two-way Bluetooth Audio link allows you to stream Bluetooth audio to the TV as well, as pair wireless headphones for private listening.

Smart TV TL;DR: Panasonic has resisted the temptation to overcomplicate its smart TV platform, offering a powerful yet intuitive alternative to rivals. Freeview Play with catch-up plus all popular streaming services, should satisfy the binge brigade.

While the GX800 isn't exactly a light cannon, its crisp, lush hues make for a hugely engaging picture. With help from Local Dimming technology and the well-established benefits of Panasonic’s VA panel, the contrast is also well above average – while clarity is enhanced by the brand’s highly regarded HCX image processor.

That said, your chosen image preset can have a significant influence on the image.

With SDR fare, the options comprise Dynamic, Normal, Cinema, True Cinema, Custom and Sport. The set is a winning choice for gamers, too: input lag measures just 10.2ms in a dedicated Game mode.

For Daylight viewing, we found the Cinema mode just too tonally flat for a satisfying viewing experience. The Normal mode was our preferred option.

We were wary of the GX800's motion handling going in, as it's never been a strong point for Panasonic. The TV maker's Intelligent Frame Creation (IFC) processing has always seemed somewhat heavy handed, but here there are clear signs of improvement.

For studio content and sports, the Min setting works well. Motion artefacts are more noticeable on Mid and Max, although horizontal pans become buttery smooth. With 24Hz movies, we would advise IFC to be turned off. This removes any motion artefacts and the screen exhibits only mild panning judder – largely an acceptable compromise.

IFC is available in Min, Mid and Max settings or can be switched off entirely.

The GX800 comes into its own with 4K HDR.  The provision of HDR10, HLG (broadcast HDR), HDR10+ and Dolby Vision make this a formidable proposition for disc collectors and streamers alike.

While Dolby Vision remains much sought after up the price scale, it’s actually a real benefit on a mid-brightness screen like this, where variable dynamic tone mapping enables the screen to more accurately reflect the intent of the creator. Unlike static HDR, a dynamic HDR approach allows the TV to manage high brightness and shadow detail on a scene by scene basis.

There are caveats to the GX800’s HDR performance though, as its ability to deliver bright highlights is tied to those image presets.

We measured its HDR peak brightness at just over 500 cd/m2 (aka nits), which is undoubtedly impressive for a mid-range TV. However, this HDR peak is only achievable using the Dynamic preset. If you’re watching in Normal or a Cinema mode, there’s less high brightness punch available – we measured around 400 nits.

To be honest, the real world difference is not that apparent when watching live content. The picture balance is so well judged that pursuing peak brightness above all else seems almost pointless.

A spin through Despicable Me 2 (4K UHD Blu-ray) offers superb colour pop and finesse. The disc doesn’t showcase of the best of HDR, but even so the provision of Dolby Vision can be seen to exert a big influence over the presentation.

When Gru first emerges from the shadows (something he does quite a lot), you’ll believe there’s bright sunlight playing across his features. The disc looks lush without oversaturation, while reds are reassuringly deep.

Of course, there are limitations to the GX800’s performance. There’s an inevitable greyness to letterbox movie bars, although screen uniformity is actually rather good (certainly on our 50-inch sample).

When it comes to integrated sound, the TV does what it needs too, but little more. Rated at 10 watts, it has enough volume and weight for everyday viewing.

Crucially, though, it’s also compatible with Dolby Atmos – there’s only so much of a boost you can get on the set’s built-in speakers, though if you connect your TV to an external Dolby Atmos sound system, you'll get immersive audio from sources such as Netflix and Amazon.

Other screens to consider

The Panasonic GX800 may have pack in some serious specs for the price, but there’s no shortage of choice in the mid-range 4K TV arena. Hisense is also offering Dolby Vision and Dolby Atmos on its 2019 U7B 4K LED LCD models, available in 50-, 55- and 65-inch screen sizes, while this year's crop of Sony TVs counters with the KD-49XG8096.

The latter boasts the brand’s high regarded 4K X-Reality Pro upscaling, but lacks Dolby Vision HDR support. Neither currently match this precocious Panasonic on how many HDR formats it supports.

Panasonic’s slick looking TX-50GX800 ticks all the boxes when it comes to HDR support, making it a difficult proposition to ignore if you want a 4K set that won’t leave you feeling left out when competing standards divide your streaming TV favourites.

The application of dynamic metadata makes a big difference on an HDR set like this. More precise tone mapping allows images to look a good deal more premium than you might expect. Remember though, you’ll need to view in Dynamic mode for the brightest specular highlights.

Overall, the inclusion of Dolby Atmos, plus a neat smart portal and excellent range of integrated streaming services, makes this a brilliant buy for film fans.