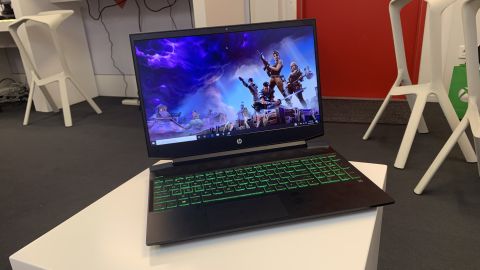 The HP Pavilion Gaming 15 might not be the most powerful laptop on the block, but its penchant for value and reasonable design make this gaming laptop worth your attention.

Gaming laptops like the HP Pavilion Gaming 15 are getting ever more popular, and it's not hard to see why. Think about it: who wouldn't want a portable device that can play the best PC games on the road?

The HP Pavilion Gaming 15, announced at Gamescom 2019, builds on the newfound popularity of gaming laptops, by launching at a low price point. It's able to do this thanks in large part to the inclusion of AMD Ryzen mobility processors and Nvidia GeForce GTX graphics. That does mean this won't be the most powerful gaming laptop on the block, but it we can expect some excellent performance for the money.

The HP Pavilion Gaming 15 was announced at Gamescom, and will be hitting store shelves in the next couple of months. It will launch for $799 (about £630, AU$1,140). This will get you an AMD Ryzen 5 3550H processor, 8GB of RAM, an Nvidia GeForce GTX 1050 and a 512GB SSD. So, definitely not going to be the most powerful gaming laptop on the street – but at that price, it doesn't need to be.

Unfortunately, if that isn't enough power for your gaming needs, you'll have to opt for another laptop. At the time of writing, this is the only model available.

We currently don't know the exact date the HP Pavillion Gaming 15 will launch, but will update this review when we hear more.

Unlike a lot of other budget gaming laptops, the HP Pavilion Gaming 15 is kind of a looker. While it doesn't have the ultra-premium design that something like the Razer Blade or MSI GS65 Stealth, it is thin and light enough to game on the go without throwing your back out.

This gaming laptop is under an inch thick, and comes in at just 4.96 lbs. That's not the lightest gaming laptop we've ever used, but you should be able to handle the HP Pavilion Gaming 15 in your backpack without much problem at all.

And, while the HP Pavilion Gaming 15 is made of plastic, it manages to pull off an aesthetic that won't cut people with its edge. The laptop has an angular, black design, with a green HP logo on the back. This logo isn't backlit, but that's to be expected with a laptop like this.

Once you open the notebook, you'll be greeted by a green backlit keyboard that honestly feels better than it looks. There's a speaker grille above the keyboard, and while we didn't get a chance to pump out the jams, we do know that HP tends to pack some respectable speakers in its laptops – and at least the speakers aren't on the bottom.

The trackpad is especially surprising, however. Not only is it large, but its responsive and doesn't feel cheap. Gaming laptops are notorious for having lackluster trackpads (why put a great trackpad in when gamers use a mouse anyways), but we are happy to see a competent trackpad here.

The display is probably the least noteworthy thing here, but that's not necessarily a bad thing. You're getting a 1,920 x 1,080 display at 60 Hz, with 250 nits of brightness. Nothing especially to write home about, but it'll get the job done.

Finally, there are plenty of ports on offer. There's just a single USB 3.1 Type-A port on the left hand side of the laptop, but over on the right you get a USB 3.1 Type A, a USB 3.1 Type-C, WLAN, HDMI, a headphone jack and a full-size SD card slot. This is frankly a ton of expansion for a laptop in this price range.

Unfortunately, we didn't get a chance to really test the HP Pavilion Gaming 15 in games. However, we do know what hardware is sitting inside, so we can make an educated guess as to how it will perform.

Some people might balk at the choice to include an AMD Ryzen processor in a gaming laptop, but we think it's actually a great idea. Not only will it keep the price down, but when paired with the Nvidia GeForce GTX 1050, you won't be able to notice the difference when compared with a more powerful Intel chip – at least in games.

And, with that Nvidia GeForce GTX 1050, you should be able to get acceptable performance in a lot of games. However, you should keep in mind that this GPU is practically designed for esports like Overwatch or Counter Strike: Global Offensive, and will fall behind in AAA titles like Metro Exodus or Assassin's Creed Odyssey.

We'll know for sure how this laptop performs when we get it in for a full review, but if you're just looking for a laptop to play League of Legends on the go, you really can't go wrong here.

That alone might be enough to sell a lot of users on the HP Pavilion 15, but the fact that a gaming laptop at this price range is able to look this good and be this light is just icing on the cake.