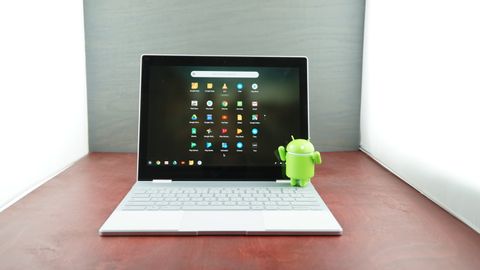 The Google Pixelbook is the first Chromebook worthy of consideration alongside the most high-end Windows and Mac devices. From its stunning design to its stupendous software enhancements, this is the best Chromebook to date, bar none.

Google has recently announced the Google Pixelbook Go, which will be the successor to the Pixelbook. Find out more about this new device, its features and its release date.

The Google Pixelbook brings a lot to the table, both in compatibility and performance, that the similarly priced Chromebook Pixel could only wish it had. In fact, it’s playing a major role in renewing public interest in premium Chromebooks, offering a taste of Android while keeping the features and design of Chrome OS intact. And, that’s something Windows 10 simply cannot compete with.

This Google Chromebook brings in a ton of modern design flair in its sophisticated form factor, something Google replicated on the Pixel Slate, as well as a gorgeous 2,400 x 1,600 display. Plus, there’s more to it than good looks – it’s also armed with 7th-generation Intel Kaby Lake processors. That’s without mentioning the Pixelbook Pen, which truly enhances the Pixelbook experience, even though it’s sold separately.

Here is the Google Pixelbook configuration sent to TechRadar for review:

For that premium price, however, you’re also getting 7th generation Kaby Lake Intel Core i5 processors on both the entry-level 128GB configuration and $1,199 (£1,199, about AU$1,555) mid-range 256GB configuration, each paired with 8GB of memory. On the other hand, the top-end 512GB option comes packing a Core i7 processor with 16GB of memory. All of these processor options are Intel’s low-power, low-heat Y series chips, which means all of the Pixelbook models are fanless.

Unfortunately, for our friends Down Under, this beauty hasn’t made in Australia. That means they’ll either have to settle for the competition or import it from the US, in which case they might have to shell out more for shipping.

Now, let’s talk about how this holds up against 2017’s Samsung Chromebook Pro and the Asus Chromebook Flip, both of which were designed in close conjunction with Google to jumpstart the company’s Android app push on Chrome OS. Both of these 2-in-1s are considerably more affordable, with Samsung and Asus currently selling for $599 (about £468, AU$869) and $469 (£366, about AU$680), respectively.

However, they’re both noticeably less powerful as well, only fitted with the same 6th-generation Intel Core m3 processor. On the upside, this processor produces low heat, which lets it take advantage of fanless chassis designs. That said, they’re both beautiful Chromebooks in their own right, even if they offer significantly less memory and local storage.

At the end of the day, these two Chromebooks are a better bargain for what the Chrome OS platform currently offers. However, the Google Pixelbook is a future-facing device. The Pixelbook is to the Chromebook what Microsoft’s Surface was to the Windows 10 2-in-1 laptops that succeeded.

The Google Pixelbook is the result of years of incredible work on Google’s part in refining a unified design across its hardware offerings. But, the Pixelbook could also be seen as a sort of coming of age for Google’s design philosophy.

It’s easy to say that this is the most stunning and remarkably designed computing device from Google yet. From the brushed aluminum frame with flush edges to the rubberized palm rest and underside, every design element has achieved style and substance in equal measure.

However, if you haven’t purchased a laptop in the last few years, you might have a hard time accepting the lack of ports. Still, the Google Pixelbook is at least future proof. Which reminds us – the webcam is just as suitable for an increasingly video-centric future with a 720p resolution and 60 frames per second capture rate.

The same can’t be said of the audio, however. This has become normal in thin and light notebooks: Google has crammed the speakers beneath the keyboard, and the result is tinny sound. Fortunately, a 3.5mm audio jack is there to let you use the best headphones with the Pixelbook.

On the upside, the glass trackpad is a pleasure to use as it tracks smoothly and precisely, both in single- and-multi-touch gestures. However, we found that the trackpad doesn’t like us resting our thumb on it to click while tracking with our index finger – a common use case, but not this editor’s personal preference.

Likewise, the Pixelbook keyboard is among the best we’ve ever used. The backlit keyboard’s keys are well-spaced, and its 0.8mm travel is a delight with forceful feedback. We also love the subtle, deeply satisfying clicking sound the keys make – it’s different from every laptop keyboard we’ve tested, and now we’re going to expect it everywhere.

The Pixelbook earns the ‘pixel’ when it comes to the 3:2 display. At 235 ppi with accurate color reproduction, the Pixelbook display rivals some of the best around, Chromebook or otherwise. It’s in the same class as the 227 ppi 13-inch MacBook Pro and the 267 ppi Surface Pro 6.

The panel works stunningly for movies and photos, as well as photo editing. The 400 nits of brightness help hugely with this. It is still a glossy screen however, and as such doesn’t stand up to direct sunlight all that well. At any rate, the display is also extremely accurate to the touch, especially when underneath the Pixelbook Pen.

First off, we’ll just say that it’s a damn shame that the Pixelbook Pen is excluded in the price of the Pixelbook, as it’s arguably crucial to the experience. However, we’re not about the say that the stylus isn’t worth the price of admission, because it 100% is worth it – if you can spare it.

The Pixelbook Pen works beautifully as a stylus, offering plenty of pressure response as well as tilt support, which makes drawing on the display a pleasure. The display’s snappy response helps the digital ink follow close enough behind the pen that any delay is indiscernible.

On the Pixelbook Pen sits a single button, which is essentially a Google Assistant button, but also seems to incorporate some of the new Google Lens technology found in smartphones, like the Google Pixel 2. Pressing the button while inking turns that ink into a thick blue, but doesn’t actually draw anything.

This will be an incredibly useful tool for students, particularly, but users in general will benefit.

Another advantage regarding the Pixelbook Pen is that it’s opened up Google Keep to support pen input, even from the lock screen, making note-taking that much easier. There are even apps that can convert the Pixelbook Pen’s scrawlings into traditional text.

However, one huge flaw in the Pixelbook Pen is that it doesn’t attach to the laptop in any way, not even via magnets, like the Surface Pro. This oversight makes it that much easier to lose this stylus that cost you so much money. Plus, it runs on AAAA batteries, whereas a rechargeable solution would’ve been much more worthy of the price tag.

As for Google Assistant, the service can be activated either using a dedicated keyboard button or via your voice, if you don’t invest in the Pixelbook Pen. However, the latter only works when the laptop is logged into – waking the Pixelbook with a ‘Hey, Google’ voice command is in the works, we’re told.

In general, Google Assistant is just as helpful as it is on smartphones and executes in the exact same way, with an OS-level chat record as well as a voice response.